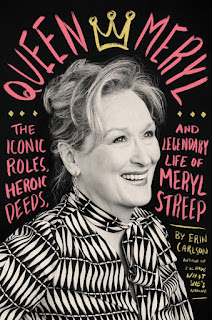 I'm a long time admirer of actress Meryl Streep and, because I enjoyed an earlier bio entitled, Her Again, I decided to try Queen Meryl as well.

This bio is all about her iconic career as well as her interactions with other performers along the way, like her run-ins with Jack Nicholson and Dustin Hoffman. The bio brought back fond memories of Streep in roles I adored. In addition to her 40+ year brilliant career in movies like: Silkwood, Julia Child, Sophie's Choice, the Deer Hunter, Bridges of Madison County, Kramer vs Kramer, Out of Africa etc., Streep has managed to maintain a no-drama persona and juggle marriage (40+ years) and motherhood (4 grown children) as well as her lending her voice of behalf of women's rights.

There were some interesting illustrations, lists and other tidbits that I enjoyed. I thought the author did a decent job covering Streep's career, but, some parts were slow and caused me to skip forward.  Readers interested in a nice review of the Meryl's successful career should give this one a try. 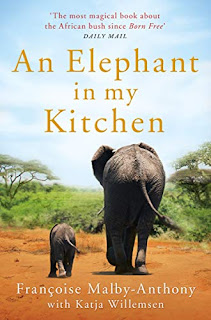 In 1998  Francoise and her husband Lawrence founded a game preserve in South Africa which they named Thula Thula.  Their mission was to help an elephant herd.  However, when Lawrence dies unexpectedly in 2012 she hardly had time to grieve as there were many gentle creatures who needed help.  When an orphaned baby found its way onto the property after its mother was killed for her ivory, Francoise decided to carry on the dream of her late husband by catering to orphaned babies: elephants, rhinos and hippos as well.

Some of this book was sad to read but, it was also insightful, funny at times and heart-warming.  A beautiful book that animal lover's who enjoy reuse stories should try.

Posted by (Diane) Bibliophile By the Sea at 2:39 PM