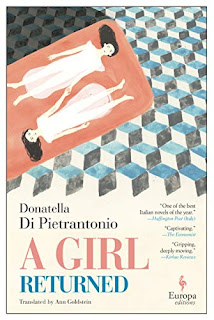 ONE SENTENCE SUMMARY:  A coming of age story about a girl caught between two families.

BRIEF REVIEW:  On what started out as an ordinary day in August of 1975, our unnamed narrator, just thirteen years old, is driven by the man she called "uncle," the man who lived with her mother, to now live with her "other mother" who she did not know.  All she is told was that her mother was sick and that this new family was her real family.
Now in the mountain town of Abruzzo, instead of being the only child, living in a nice home by the sea, she has been thrust into a chaotic household with 4 other children and too little of everything.  In this home the siblings must even fight for food.  Despite the trauma of being removed from the only family she had known,  our narrator develops a special relationship with the younger sister Adriana, 3 years her junior. The sisters become each others protector.  Over the course of a year although she receives money and gifts from her other mother, it isn't until almost the end of the novel that the mystery surrounding why she was taken from one family and given to another is revealed.
This is a brief novella, just 170 pages, and such a compelling coming-of-age story. My heart went out to the unnamed narrator, referred to only as the "Arminuta " (the returned), she was such a bright girl, a good student and a good daughter who struggled to understand why she was taken from her home so suddenly and forced to live with another family. The story was translated from the Italian by Ann Goldstein who has translated all the Elena Ferrante works.  A wonderful story, I loved how it ended as well.  Highly Recommended.
RATING: 5/5 stars

MEMORABLE QUOTES:  "One had given me up with her milk still on my tongue, the other had given me back at the age of thirteen. I was a child of separations, false or unspoken kinships, distances. I no longer knew who I came from. In my heart I don't even know now."

Posted by (Diane) Bibliophile By the Sea at 6:00 AM