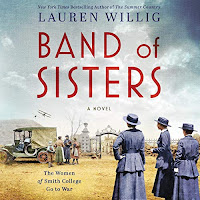 ONE SENTENCE SUMMARY:  An engrossing story about a group of Smith College women who volunteered to help French civilians in 1917 during WWI - based on a true story.

BRIEF REVIEW:  Five years after graduating from Smith College, a private women's college in western Massachusetts,  a group of alumni band together and head to France to help with the war effort. Most of the women are from wealthy families with the exception of Kate Moran, a scholarship student from New York.   Kate is pleaded with to join the group when another woman is unable to go. Even though she has reservations she agrees to help out her wealthy best friend Emmie.  The two women join some fifteen other strong, determined women including a few physicians among the group as part of the Smith College Relief Unit.
The group is met with many challenges, the least of which was hotel accommodations in Paris which were not up to expectations of some of the wealthy women.  The women are unprepared for what they then face on the frontlines: untreated injuries, missing civilians, supply and equipment issues, a town which has been destroyed by the Germans, poisoned water, no crops and locals living in a burned out roofless castle. Faced with desperate circumstances and bickering among the women, they do truly band together and do what it takes whether it be learning to drive trucks, tending the injured, comforting children or working with animals.
Band of Sisters is a work of fiction based on true events which included letters written by the women during the relief effort. The story is strong and is a testament to the power of female friendship despite personality differences along the way.  The author wrote an amazing story and although it could have been extremely sad, it never felt that way because there were some lighter elements and occasional snarkiness peppered throughout.  While I thought I would like Kate more than I did, she often cam across as annoying and Emmie ended up being my favorite character instead.  There are many women in this story but, most played a minor role in the telling of the story. Julia Whelan did a good job as audio narrator, yet, this was another audio book where at times I thought her inflection seemed a bit off for the seriousness of the story.
For me this was a combo read/listen: eGalley and audio download sent to me by Net Galley and Harper Audio/William Morrow. Fans of historical fiction should enjoy this one.
RATING: 4/5 stars
Posted by (Diane) Bibliophile By the Sea at 10:46 AM