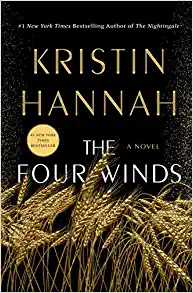 ONE SENTENCE SUMMARY:  A heartbreaking story of a mother's desperate attempts to provide for her children.

BRIEF REVIEW:  Elsa Martinelli was born into a wealthy family but had never felt loved until she became a mother herself.  Living with her husband and in-laws on a large farm in the Great Plains of Texas, she loves her life and her in-laws who are hard working farmers.  However, when a prolonged drought makes farming impossible and her husband up and leaves, she feels she must forget her fears and change her current situation to provide for her children.   As things become more desperate Elsa, Loreda and Anthony (Ant) leave her in-laws farm with an old truck, a tank full of gas, minimal possessions and supplies and a very little cash.  They head for California in hopes of finding work.  The journey leads them into a variety of terrible circumstances for which they were not prepared.
The Four Winds is such  beautifully written piece of historical fiction about the period 1920-1940.  It is also a tragic story about a time when nearly 100,000 people headed for CA in just over a year with everyone hoping for a better life. The author does an amazing job depicting the terrible situations which lead to the Great Depression.  With well-rounded characters, it's a story that will make many readers both angry and sad.  Everything about the story made me feel what the characters were experiencing: the setting, the dust storms, lack of food, medical services and even basic supplies but, especially the desperation of Elsa and the love for her children in the midst of adversity.  A very sad story but, one that I will never forget.
RATING: 5/5 stars

"I see one-third of a nation of ill-housed, ill-clad, ill-nourished...The test of our progress is not whether we add more to the abundance of those who have much; it is whether we provide enough for those who have too little.  (1934 - Franklin D. Roosevelt)

"She learned how to disappear in place long ago.  She was like one of those animals whose defense mechanism is to blend into the landscape and become invisible.  It was her way of dealing with rejection: Say nothing and disappear. Never fight back. If she remained quiet enough, people eventually forgot she was there and left her alone."
"Books had always been her solace; novels gave her the space to be bold, brave, beautiful, if only in her imagination."
"The world can be changed by a handful of courageous people. Today we fight on behalf of those who are afraid."
Posted by (Diane) Bibliophile By the Sea at 6:16 PM