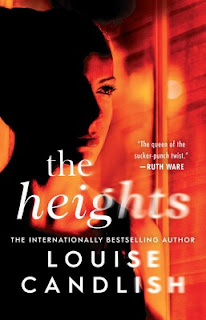 The Heights is a disturbing twisty thriller that examines the psychological effects resulting from the tragic loss of a child.

He thinks he’s safe up there. But he’ll never be safe from you.

The Heights is a tall, slender apartment building among the warehouses of Tower Bridge, its roof terrace so discreet you wouldn’t know it existed if you weren’t standing at the window of the flat directly opposite. But you are. And that’s when you see a man up there – a man you’d recognize anywhere. He’s older now and his appearance has subtly changed, but it’s definitely him.

Which makes no sense at all since you know he has been dead for over two years. You know this for a fact.

Because you’re the one who killed him. It’s time to confess what we did up there.

Ellen Saint is wife, mother and a lighting consultant with a very real fear of "heights." Married to Justin, Ellen has a teenage son named Lucas who lives with them even though her ex-Vic( father of Lucas) is still very involved in his life. Justin and Ellen also have a twelve year old daughter Freya together.

As the story begins we learn that Lucas is an academic scholar at the Foxwell Academy in Beckenham (UK).  He has been assigned as a buddy to a new student named Kieran Watts. Kieran lives with his foster mother Prisca in South Norwood.  From Ellen's first interaction with Kieran, she senses a concern that he is not the type of friend she wants for her son.  Her instincts are right as since Kieran and Lucas have been hanging out Lucas has seemed to have changed - his grades are sliding, his is partying and and there is proof of drug use as well.  When a tragic incident occurs and Lucas ends up dead, Ellen is sure that Kieran is to blame and she is determined he will pay for the death of her son.

The Heights was an addictive read that drew me in early on.  Ellen was a well-written character who is bent on revenge. The loss of her son brings out the worst in Ellen and, her life is consumed with thoughts of revenge for a young man she believes does not deserve to live.  The story is written in the form of a memoir called "Saint or Sinner" and, it is told in four parts from the POV of both Ellen and Vic (father of Lucas.)  This style worked well and gave a unique perspective of allowing readers to form the own opinions based on differing views of what has transpired. The writing was edgy and provided for some unexpected twists as well.  I really enjoyed this one but I did feel that at 400pp it was a tad too long.  If you enjoy good psychological thrillers - be sure to try this one.

Thanks go to Atria Books for sending a review copy my way.  This book releases in the US on March 1, 2022.

Email ThisBlogThis!Share to TwitterShare to FacebookShare to Pinterest
Labels: Atria, Books That I Liked, Review Books