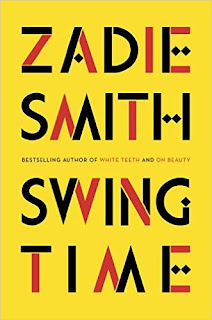 "It was the first day of my humiliation.  Put on a plane, sent back home, to England, set up with a temporary rental in St. John's Wood.  The flat was on the eighth floor, the windows looked over the cricket ground.  It had been chosen, I think, because of the doorman, who blocked all inquiries.  I stayed indoors. The phone on the kitchen wall rang and rang, but I was warned not to answer it and to keep my own phone switched off.  I watched the cricket being played, a game I don't understand, it offered no read distraction, but still it was better than looking at the interior of that apartment, a luxury condo, in which everything had been designed to be perfectly neutral, with all significant corners rounded, like an iPhone. When the cricket finished I stared at the sleek coffee machine embedded in the wall, and at two photos of the Buddha--one a brass Buddha, the other wood--and at a photo of an elephant kneeling next to a little Indian boy, who was also kneeling.  The rooms were tasteful and gray, linked by a pristine hallway of tan wood cord. I stared at the ridges in the cord.


Based on this intro, would you read more or pass on this book?

Feel free to join in by posting your own First Chapter First Paragraph Intro and linking below.