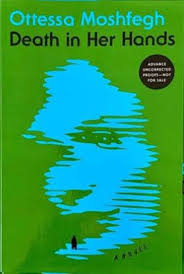 As the story opens Vesta, a recent widow in her 70s, is taking a walk in the woods with her dog Charlie when she finds a note on the ground held in place by stones. The note read "Her name was Magda. Nobody will ever know who killed her. It wasn't me. Here is her dead body."

Vesta moved to a cabin in the woods on the lake after her husband died.  Since she is new to the area, and doesn't know anyone she finds herself obsessing over the note in the woods, imagining the life that Magda might have lived. As she ponders the life of Magda, we get some insight into Vesta's mindset and her unhappiness about how her own life has played out.

I've read several books by the this author which I really enjoyed but, this one was not one of them.  Told in a stream of consciousness style from the imaginings of a lonely old woman living an isolated life, I kept waiting for a revelation but, I ended up disappointed overall. I found that I couldn't even feel sorry for this lonely, isolated woman, if I was able to, I think my rating would have been a bit higher. 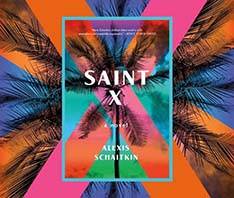 In 1990 a family from NY is vacationing on Saint X, a fictional 5 star resort in the Caribbean.  It's a vacation that ends in tragedy for their college freshman daughter, Allison.  Although there were (2) suspects in Allison's death, they were released when authorities decided there just wasn't enough evidence to hold the young men. As a result, the husband, wife and Claire, their 7 year old daughter, are forced to leave the island and attempt to rebuild their lives in NY.

This is not a story about one brilliant young woman's death but, how the younger sister is affected by the loss of the much older sister she had idolized.  Once the family returns home, the story fast forwards pretty quickly to Claire as a young woman who has now become obsessed with her sister's death and how her life has been affected.

As I read this story I immediately thought of the Natalee Holloway case (2005) who disappeared from Aruba on her senior high school trip and although she was never found, she has since been declared dead.

Although I was immediately drawn into this story, I had a problem with the writing style, quite often I found I never knew who was speaking. I also thought that the the ending was a disappointing.

Posted by (Diane) Bibliophile By the Sea at 8:59 PM