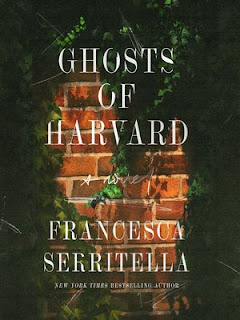 The Ghosts of Harvard; Francesca Serritella

As a student at Harvard, Eric Archer was a brilliant young man destined to do great things in the sciences.  He was also paranoid schizophrenic and was known to sometimes go off his meds.  When Eric ends up committing suicide as a student, there is a huge void. behind  What drove Eric to commit suicide?

Now Candace (Cady), Eric's younger sister, is a freshman at Harvard despite the fact her mother did not want her to return to the place of her brother's death.  On campus Cady is determined to find out more about her brother's final weeks at Harvard.  Yet, almost immediately she begins hearing voices from the past. It's not her brother's voice so, who are these people she hears? Or, is mental illness something she is experiencing as well resulting from the loss of her brother?

I love a campus setting and, the old buildings of Harvard, steeped in history of those who walked the halls in days gone by, made for a terrific, creepy setting.  The dark winding corners, unexplored grounds added to chilling effect as I read.  I liked that Cady used old notebooks of her brother to try and decipher clues that lead to his death. The author did a good job showing how different members of the same family deal with suicide and the grief which results.

I had some issues with the Cady character and the way she reacted in a few situations; it did not feel genuine. I also thought some of the dialogue, by college-aged students, seemed weird and not the way a college student would talk. There was a ghost/paranormal element to the story that didn't work well IMO. There were far too many conversations with ghosts that served very little purpose.  This novel might been more effective had it been written as a shorter psychological thriller without the paranormal bend. The Ghosts of Harvard is nearly 500 pages and, I admit to glossing over many of the ghostly conversations.