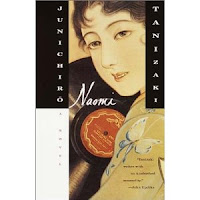 
Naomi, translated from the Japanese was an entertaining read. I wasn't sure what to expect when I started reading this one, but by the time I was finished I had a big smile on my face.
The story takes place in 1920's Tokyo, where Naomi, a 15 year-old from a poor background  works as a waitress at the Diamond Cafe. She is an attractive girl with "Eurasian" features.  When Joji, a 28-year old Engineer, first sets eyes on her, he thinks she is beautiful, and before long he becomes obsessed with her.  He thinks she has the perfect blend of eastern and Western features and a beautiful if not somewhat unusual name.  Joji in contrast is nothing to look at, he's short, has "bad teeth" and is socially inept.
Initially Joji sees himself as a father figure for Naomi, but deep down thinks he can transform her into the perfect Western woman.  She comes to live with him and initially does some household chores for him. He tries to teach her English and even pays for her to take music lessons. She isn't very good at either, but he still has hopes of molding her into the perfect woman, and then making her his perfect, beautiful wife.
They do marry, but it isn't long before Joji's plan backfire. Naomi soon begins to take total control over him. She becomes manipulative, spends more money than he makes, and quite plainly does what she wants to do and sees who she wants to see including other men. She makes a fool out of Joji.
Joji the protagonist of this story is really a pathetic man who has lost all respect. Even when he tells Naomi to move out, he finds he misses her and, she knows what cords to pull to keep him interested in her, and finds reason after reason to return to the house when he is there. Having lost all self-respect, Joji feels like he has to put up with Naomi calling the shots.
I really liked this story and it packs a punch for a short book -- about 250 pages or so, and it made me chuckle at times as well. I found Naomi to be almost a cautionary tale about what can happen when you try to make someone into the type of person you want them to be. I think we all know that it rarely works and the person, in most cases, just resents the other person for having tried.
It's a great read - Try it!
Posted by (Diane) Bibliophile By the Sea at 7:59 PM