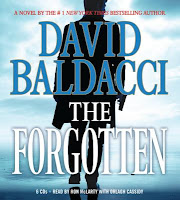 I always enjoy listening to a good thriller while driving and the blurb I read about David Baldacci's latest novel, The Forgotten seemed to intrigue me:


"In Paradise, nothing is what it seems."


Army Special Agent John Puller is a character that was introduced in Baldacci's earlier novel, Zero Day. He is a war veteran experience in combat and still works on tough cases for the US Army's Criminal Investigation Unit.


Puller's father suffers from dementia and now resides in a nursing facility. The senior Puller thinks his son is his former Executive Officer from back when he served in the military.  He shows his son a letter sent to him by his sister who resided in the wealthy, Gulf Coast community of Paradise, Florida. The letter states that things in Paradise are not as idyllic as they may appear to be.  Puller's dad sends him on a mission to check out what exactly she is referring to. Puller hasn't seen his aunt in a long while and feels bad about that so he decides to pay his aunt a visit.


Taking some leave time, he heads down to Paradise. Once he arrives, he learns that his aunt is dead.  The police have ruled her death accidental saying she must have slipped, fallen and then drowned in her backyard fountain. The fountain had just just 3" of water in it. Puller is convinced that his aunt's death was not an accident, and is determined to find out what happened to her.  He soon realizes that he is being followed and is determined to dig deeper. In the process he learns that a local couple was found dead on the beach and some children are missing. Did his aunt discover something that someone did not want anyone to know? Are local officials trying to hide something as well?

The audio book readers, Ron McLarty and Orlagh Cassidy were very good. I hadn't read the earlier book when Puller made his debut, but it didn't seem to matter really. Most of the book held my interested, but certain parts seemed a bit far-fetched, and the ending was somewhat disappointing. Although there were some twists and turns along the way, the story ended up being just okay for my taste.
Posted by (Diane) Bibliophile By the Sea at 8:18 PM