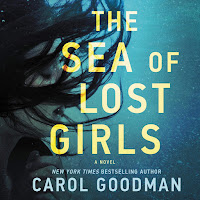 Tess Henshaw is a woman with secrets. She's married to Harmon, a professor at The Haywood Academy, an elite boarding school in Maine. Tess also works at the school.

As the story begins Tess receives a middle of the night call from her 17 year old troubled son from a previous marriage. Rudy is scared and asks his mother to meet him at their secret "safe space."  When the two connect, Rudy is soaking wet and has a dark stain on his sweatshirt.  Several hours later they learn that Lila, Rudy's girlfriend, has been found dead on the beach.

This is a story with more than one suspect and an unreliable narrator. Although the story kept me guessing, I thought there were too many characters, many women who had been taken advantage of by powerful men. As psychological thrillers go, this one was just okay. The audio version was narrated by Natalie Naudus, who did a good job.
Posted by (Diane) Bibliophile By the Sea at 7:01 AM