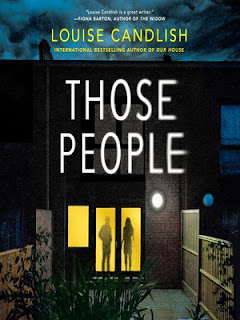 ONE SENTENCE SUMMARY: What's a neighborhood of seemingly peaceful people to do when the new people on the block disrupt that friendly mix?

BRIEF REVIEW: Someone has died in a terrible accident as this novel opens, was it an accident or something more sinister?  As the police begin to interview the neighbors as to what transpired leading up to the tragedy, readers begin to learn more about each neighbor as well as the newbies: Darren & Jodie Booth who inherited the house next door eight weeks earlier.
Haven't we all had an annoying neighbor at one time or another? It was easy to dislike the new couple, at least early on. The Booths turned the lovely street into what looked like a used car lot out front. The place was a construction zone with extensive renovations happening and loud music playing to name a few of the annoyances. When neighbors try to voice their issues in a civilized manner, nothing changes.
This is a story where class divide comes into play.  Some neighbors seemed to feel they were better than the new people, especially when they saw their unwritten rules to conform ignored.  The story was pretty good and had a lot of potential but, I thought it could have been better.  I found it hard to keep all of the neighbors, as well as their various issues and secrets straight.  It would have been nice to have a feel where each of them lived on the street in relationship to each other.  If you enjoy domestic thrillers/suspense stories, you might want to add "Those People" to your list.
RATING: 3.5/5 stars

MEMORABLE QUOTES: “It was in her hand, as everyone’s was these days, as if phones were dialysis machines that could not be out of reach without life-threatening consequences.”

Posted by (Diane) Bibliophile By the Sea at 5:08 PM