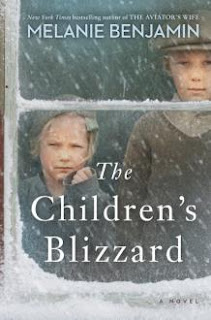 ONE SENTENCE SUMMARY: A fictionalized account of the 1888 Children's blizzard that hit the Great Plains and 235 lives were lost.

BRIEF REVIEW:  Based on true events,  January 12, 1888 was a bright and mild morning following a severe cold spell in the Great Plains.  Children who had been home from school because of the cold spell were able to return to school that morning with lighter than normal clothing.  When the blizzard arrived later that day with temperatures dropping to minus 40 below and the blinding snow blanketed the area, a disaster was in the making.  School teachers Gerda and Raina Olsen,  just teens themselves, 16 and 18 years old, were unprepared for the tough decision they had to make: keep the children in their classrooms and risk having them freeze to death when heat ran out and temps plummeted or send them on their way and hope that they got home safely.
The first half of this book pretty much explores what occurred up until the blizzard hit. We learn more about the Olsen sisters  and the choices they made while the second half tell of the blizzard's aftermath and the backlash that followed for the sisters.  While this story was interesting enough to me, I think it could have been improved on as well.  I found myself wanting to know more about the families who lost a loved one in the blizzard and less about child exploitation.  Some of the writing felt a bit uneven and jarring at times as well and even like the time period did not feel right. Despite this, I am still glad I tried this one.  I do want to read the 2005, non fiction book, The Children's Blizzard by David Laskin to compare the specifics about this terrible event.  I feel that this would make a good book group discussion choice.
RATING: 3.5/5
Posted by (Diane) Bibliophile By the Sea at 3:31 PM

Email ThisBlogThis!Share to TwitterShare to FacebookShare to Pinterest
Labels: Ballantine