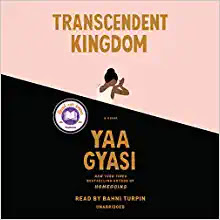 ONE SENTENCE SUMMARY:  A beautiful story about family, faith, science and religion.

BRIEF REVIEW:  I didn't think author, Yaa Gyasi could outdo herself after her incredible debut novel, Homegoing, yet she did with Transcendent Kingdom.  Her latest novel is completely different from her debut, it almost felt as if I was listening to a memoir.  The audio book is read by Bahni Turpin who was just fantastic; it felt as if she was speaking to me.
Our protagonist, Gifty, is a post grad student at Stanford in the neuroscience program. Her focus is on studying the behavior of mice in relation to addiction and depression.  The research is deeply personal to Gifty as her older brother, Nana,  a stellar athlete, died of a heroin overdose once he became hooked on opioids after a sports injury.  Gifty's mother, a God-fearing woman,  suffers from severe bouts of depression that leave her unable to function.
Beautifully written and a bit sad at times, we learn of Gifty's lonely early years as the youngest child and only daughter, growing up in Alabama as the child of an immigrants from Ghana.  Her mother often unable to get out bed when her depressive episodes hit.  At other times when she was better, she still seemed removed and/or focused on son Nana and her church.  Transcendent Kingdom is a multi-layered story that flowed so well. It offers the reader plenty to think about and it also packs a punch.  Although this is not a fast paced story, it is a deep character study and a story that looks at concrete science data versus religious beliefs.  We also see the racial prejudices expressed by those who claim to be religious. This is a book that will stick with me and I suspect most readers for a long while. Highly recommended - my favorite book thus far in 2021 and one I'll likely reread in the future.
RATING: 5/5
MEMORABLE QUOTES: "If I thought of my mother as callous, and many times I have,  then it is important to remember what a callous is: the hardened tissue that forms over a wound."
"My memories of him, though few, are mostly pleasant, but memories of people you hardly know are often permitted a kind of pleasantness in their absence. It's those who stay that are judged the harshest, simply by virtue of being around to be judged."
Posted by (Diane) Bibliophile By the Sea at 6:00 AM