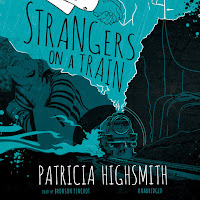 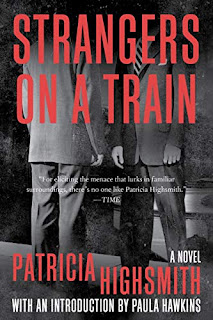 ONE SENTENCE SUMMARY:  A  conversation between two men on a train (one a drunken psychopath) leads to murder.

BRIEF REVIEW:  In this story two men who have never met before are riding the same train. One man, Guy Haines is a decent man with a cheating wife named Miriam.  Guy is in the process of a divorce yet has a promising career and is involved with a nice woman named Ann.  The other guy is Charles Anthony Bruno is a lazy drunk from a rich family who can't wait for his father to die so he can inherit some money.  Bruno has a few too many drinks on the train and strikes up a conversation with Guy.  While Guy is just trying to mind his own business, he does tell Bruno a little too much info about his soon to be ex-wife.  The two part ways but before too long Miriam is dead - strangled and now Bruno is looking for Guy to help him out by getting rid of his father.  Unfortunately, Bruno is a psychopath that will stop at nothing to see that the rest of his plan is executed.
This was tense and sometimes disturbing story that pulled me in immediately.  I love deeply flawed characters and that combined with intense drama was a great combination.  It's one of this stories that shows readers what can happen when people become crippled by their own fears and guilt.
Although I saw the (1951) movie adaptation some years ago, I had never read the book until now.  I was so impressed that this book was Patricia Highsmith's debut novel (1950).  This was a combo print and audio read. The audio is read by Bronson Pinchot who did a fabulous job. Of course, now I want to see the movie again soon.
RATING:  4/5 stars
Posted by (Diane) Bibliophile By the Sea at 12:00 AM