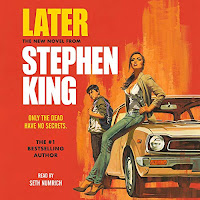 ONE SENTENCE SUMMARY:  A young boy with a special gift and his struggling single mother's efforts to protect him.

BRIEF REVIEW:  Jamie Conklin is a nice young boy who's just a bit different. He can see dead people but, it's a secret that Jamie and his single mother hope to keep to themselves.  The dead people don't stick around forever, once their spirit fades so do their voices and then they move on.
Mother and son's life has gone from very good living on Park Avenue, NYC  to money being tight and having to move.  When his literary agent mother asks Jamie for a special favor by using his special ability,  it's no longer just their secret as his mothers girlfriend Liz, a NYPD Detective becomes aware of his powers as well. Unfortunately, she is a crooked cop who takes advantage of Jamie's ability for her own evil purposes.
The very end of the book goes to something I hadn't even thought about and wasn't expecting. It's nothing bloody or gory just a OMG moment that made me wonder.
This is one of those shorter Stephen King books, it's a Hard Case Crime release and it was great on audio - very easy to follow with not too many characters.  The first person narrative worked really well and there aren't too many supernatural spirt encounters.  As always King's writing did not disappoint. The audio is narrated by Seth Numrich who did a great job.  Worth Reading if you like this genre.
RATING:  4/5 stars

"I don't think the world starts to come into focus until you're fifteen or sixteen; up until then you just take what you've got and roll with it."