Book Review - Everything That Rises Must Converge; Flannery O'Connor 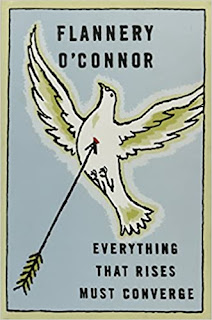 TITLE/AUTHOR:  Everything That Rises Must Converge; Flannery O'Connor

ONE SENTENCE SUMMARY:  A short story collection that might shock you as well as make you smile with some hot topics like race, faith and morality.

BRIEF REVIEW:   This was an enlightening collection of (9) short stories that I was easily captivated by. The writing and subject matter in most stories was so different from anything I've read in a long while. The collection was written in the early 60s and published after the author's death.  With themes like faith, race, morality and death.  Six of the nine stories speak of dying and death and most exhibit some form of prejudice or downright racism.  Despite the serious topics, O'Connor's writing style and scenarios she created often made me smile.
My favorite was the title story: Everything That Rises Must Converge.  In this story, Mrs. Chestny and her son Julian live in 1960s New South,  and have conflicting views on desegregation now that the laws have begun to change.  Mrs. Chestny has a weight problem and takes the bus to the YMCA in an attempt to exercise and trim down but, now that integration is in effect she is nervous about riding the bus.  There is a scene where she wears a big fancy hat and is all prim and proper riding the bus to go to the YMCA when a black woman on the bus is wearing the exact same hat.  There is an incident when they get off the bus where Mrs C. insults the black woman and her young boy and the offended hits her with her purse in retaliation causing Mrs. C  a fatal medical event.   I loved the writing style where the reader got to see the happenings from a 3rd party POV but, is also privy to son Julian's outrage of his mother's behavior.  One final thought was that although Julian, a college graduate, saw himself as more progressive in thought when it came to how times were changing, deep down he wasn't very self-aware and actually pretty small-minded and rather petty.
Most all of these stories seem to feature characters who were racist yet fail to see this in themselves.  I thought that the author had an amazing gift of pointing out irony and the absurdities of life. I definitely plan to read more by this author and, I actually own a few more of her books. Here is a LINK to my review of another of her short-story collections: A Good Man is Hard to Find and other stories which I read and reviewed in 2012 and also enjoyed.
Flannery O'Connor grew up in devout Catholic family in rural Georgia. Sadly she passed away at the age of 39 in 1964 of a form of Lupus, the same disease that took her father's life when Flannery was a teen. I wonder how her writing style might have changed after Civil Rights had she lived.
RATING:  4.5/5 stars

"Will you for God's sake get off that subject?" Julian said. When he got on a bus by himself, he made it a point to sit by a Negro, in reparation as it was for his mother's sins.

"Mrs. May winced. She thought the word Jesus should be kept inside the church building like other words inside the bedroom."

"She was a good Christian woman with a large respect for religion, though she did not, of course, believe any of it was true."