FYI - Yesterday, for some mysterious reason, Blogger flagged this post and deleted.  Now they approved it stating it was flagged as it violated their malware and virus policy and further violations could result in termination of my blog.  I'm totally confused as this post is no different than the sort I've been posting for 13 years! (so if I disappear someday from blogging, it's because of them not me.) Bloggers - has this happened to you? Any suggestions? 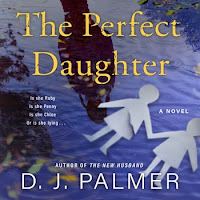 ONE SENTENCE SUMMARY:  A teenage daughter with DID (Dissociative Identity Disorder)  is accused of murdering her birth mother.

BRIEF REVIEW:   Penny Francone is the 16 year old adopted daughter of Grace and her late husband.  Grace also has two older sons, one in college and another who helps Grace to keep the family restaurant running since Arthur's death.  Penny has been arrested for the murder of her birth mother and the evidence against her is mounting but, what possibly could have been her motive?  She is sent to a locked psychiatric hospital in MA. and bit by bit we learn several things about Penny. She was abandoned by Rachel, her birth mother, in a park at the age of four, she has DID (formerly called multiple-personality disorder) in which Chloe, Ruby and Eve have been known to manifest.
Grace is determined to prove her daughter is innocent and relies on Dr. Mitch, a determined psychiatrist who is working with Grace to uncover locked memories about the day Rachel was murdered.
The Perfect Daughter was a fast paced thriller that kept me wondering what was true and who had a reason to want Rachel dead. I found myself changing my opinions about a couple characters from time to time as new twists were introduced.  I found the ending satisfying and liked the epilogue which followed as well.
Dan Bittner and January Lavoy did a great job with the audio narration.
RATING:  4/5 stars
Posted by (Diane) Bibliophile By the Sea at 6:51 PM