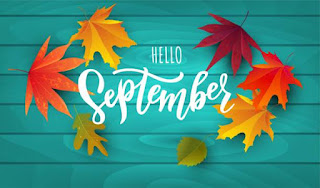 Hey readers, this week finds me with enough energy to share some bookish thoughts on some more recent  books that  I've read or listened to in September (so that's progress.) 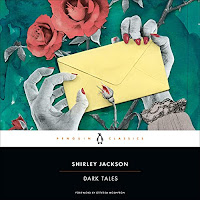 Dark Tales: Stories; Shirley Jackson
Penguin Audio - 2021
)8 hours - multiple narrators - all excellent
Dark Tales was a collection of (17) short stories.  I enjoyed more than half of the stories and, although all of the stories were new to me, I didn't find them all that scary or creepy.  If anything some of the stories that I didn't care for just seemed just kind of odd. The best part of the collection was the quality of the audio narrators: Ottessa Moshlegh, Kirsten Potter, Kimberly Farr, Karissa Vacker and Mark Deakins.
One very short but powerful story was called; What a Thought, which explored all the different ways a wife considers killing her husband who seems likely a decent guy.  She is obsessed  with these thoughts and the ending was shocking.  Louisa Please Come Home was another one I liked.  A younger girl isn't happy with her home life and runs away, changing her appearance many times.  After being gone for over (3) years and no response to the reward the family has offered, a man she meets convinces her to go home so he can claim the reward.  The family does not recognize their daughter with her changed appearance and the man who brings her home has a history of trying to claim rewards with other missing persons so in the end nothing has changed. The final one I will mention was All She Said Was Yes - A young girl's parents have died in a car accident and the neighbor takes the girl in until some family is able to take her with them.  When trying to talk to the girl about her feelings about her parent's death, her response is a rather flat affect and the claim that she told her parents this would happen to them but, they didn't listen.  The girl has other warnings including one for the neighbor who took her in but, will they heed her warning?
I liked the situations Jackson created with these stories, simple, everyday people and occurrences which suddenly take a darker turn and the reader can easily imagine that things will not end well. Other stories had a locked-room feel.  It was fun to listen to a few of these at a time. Worth trying.
RATING - 4/5 stars 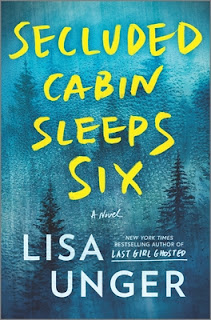 Secluded Cabin Sleeps Six; Lisa Unger
Park Row - 2022
(eGalley)
Three couples all family and friends escape to a luxurious, isolate cabin in Georgia, complete with all amenities including spa and personal chef.  It isn't long before a dangerous storm take hold, internet is out and all communication to the outside comes to a halt.  If things couldn't get much worse one of the group members goes missing.
A thriller with a creepy, locked-room feel, this story is told from multiple POVs and past and present timelines which made this story all too much at times. All of the characters seemed spiteful and full of secrets (except for one individual). I found it hard to keep turning the pages at times and put this aside for several days at one point.  I did love the set up and the setting but, the characters left me mostly disappointed.
RATING - 3.5/5 stars 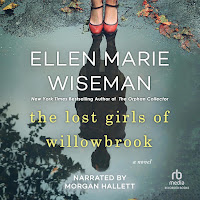 The Lost Girls of Willowbrook;  Ellen Marie Wiseman
Recorded Books - 2022
(Library audio download - 13_ hours - Morgan Hallett narrator - very good)
This story is based in part on a true story surrounding The Willowbrook State School in Staten Island, New York in the 1970s.
Sage and Rosemary Winters ere identical twins who loved many of the same things, even though Rosemary had some developmental and emotional issues.  At age 13, the girl's mother was killed in a car accident and Sage is led to believe by her step father that her twin sister died of pneumonia.  The truth is Rosemary was sent to Willowbrook because he didn't want to deal with her after the mother's death.
At 16, Sage discovers the truth and goes to Willowbrook to find her sister.  At Willowbrook Sage is mistakenly believed to be Rosemary who had recently gone missing.  While trying to convince staff that she isn't Rosemary she begins to witness first hand the horrors of how residents of the state school are mistreated and abused.
This was a tough read at times to see how those trusted in the state's care were treated prior to this institution being closed in the 1970s.  Although some of the story felt repetitive, I thought that the author did a good job emphasizing the abuses that took place and how administrators looked the other way.  I was happy I decided to listen to the audio which was well done.
RATING - 4/5 stars 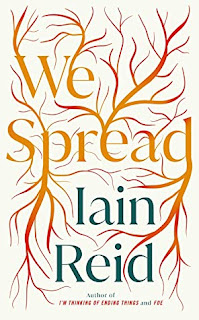 We Spread; Iain Reid
Simon ^ Schuster Audio - 2022
(5 hours 58 minutes)
Narrator - Robin Miles - very good)
(audio download sent by publisher)
Penny is an elderly artist who has lived in the same apartment with her long term partner for years and years.  After her partner passed away, she felt comfort in the sameness of her days, surrounded by the things she loved and which brought her comfort. She felt happy and at peace despite the fact her partner had died.
After a few incidents at the apartment, she finds herself uprooted from her apartment and the things that she loves to a strange but beautiful home occupied by several elderly residents her age and some kind staff.  The group dines together, continues with hobbies and socializes. They are supervised by a caring staff who monitors their daily activities but, for Penny it is not the same as her apartment.
This was quick, well-written novel that I very much enjoyed.  It was one of those stories that as a senior myself, made me pause and reflect. It was hard to see many of Penny's prized possessions of her former life packed away as she was moved to her new residence.  Her new life was often clouded by confusion yet it felt quite realistic.
RATING - 4.5/5 stars
Posted by (Diane) Bibliophile By the Sea at 8:00 PM