86 - The Sweetness at the Bottom of the Pie; Alan Bradley 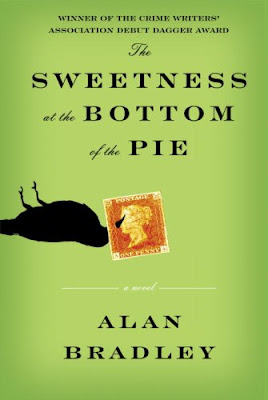 The Sweetness at the Bottom of the Pie

, is a debut novel (the first in a series of at least 3 but possibly six books), by Canadian author Alan Bradley, and boy is it a winner.

A wonderful lighthearted mystery with a delightful protagonist: eleven year old Flavia de Luce. Flavia is a bright precocious young sleuth who wins hands down over Nancy Drew in my book.

Set in the 1950’s, Flavia and her eccentric family live in an old run down English manor called Buckshaw. Her father is an eccentric widower, her mother having died in a mountain climbing adventure. Flavia is an adventuress like her mother. She enjoys riding her bike “Gladys” around the village and talking with her neighbors. Flavia also has two older sisters (17) and (13), with whom she does not get along, in fact the sisters blindfolded her and tied her up in a closet. So it is not surprising that she spends time thinking about ways to get even with her sisters.

Much of Flavia’s thinking and planning her revenge involves her secret love of Chemistry. She secretly concocts poisons in the fully stocked laboratory located in the old mansion the family had inherited. (How about poison ivy laced lip stick for her sisters)? She is also curious to find out more about her emotionally distant father who spends endless hours behind closed doors with his stamp collection. To find out more about him, she snoops around gathering clues at every opportunity.

When is series of suspicious events occur: a dead black crow on their doorstep with a postage stamp impaled on its beak; then a late night caller visits her father, the two argue loudly behind closed doors, and then in the morning a mysterious man is found dead in the garden, Flavia adventurous side goes into high gear. When he father is accused of the murder, Flavia will do anything to clear her father. Only Flavia seems to have the persistence to find out who and why a dead man was found in their garden.

The first person narrative by this unconventional spunky protagonist works so well, it was hard to believe a seventy year old male could capture the character of this eleven year old detective so beautifully. I caught myself laughing at loud numerous times as Flavia worked to solve the mysteries. It is easy to see how this book was the Winner of the 2007 Crime Writer’s Association Debut Dagger. I look forward to the next installment of the new series. HIGHLY RECOMMENDED!