Just take a look at this awesome cover art, doesn't that make you curious for more? 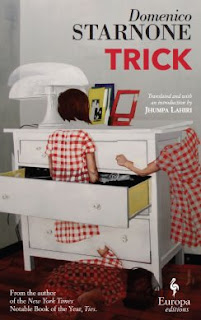 (Description) - Trick is a stylish drama about ambition, family, and old-age that goes beyond the ordinary and predictable. Imagine a duel between two men. One, Daniele Mallarico, is a successful illustrator who, in the twilight of his years, feels that his reputation and his artistic prowess are fading. The other, Mario, is Daniele's four-year-old grandson. Daniele has been living in a cold northern city for years, in virtual solitude, focusing obsessively on his work, when his daughter asks if he would come to Naples for a few days and babysit Mario while she and her husband attend a conference. Shut inside his childhood home―an apartment in the center of Naples that is filled with the ghosts of Mallarico's past―grandfather and grandson match wits as Daniele heads toward a reckoning with his own ambitions and life choices.
Outside the apartment, pulses Naples, a wily, violent, and passionate city whose influence can never be shaken.
Trick is a gripping, brilliantly devised drama, "an extremely playful literary composition," as Jhumpa Lahiri describes it in her introduction, by the Strega Prize-winning novelist whom many consider to be one of Italy's greatest living writers.

(Intro)
"One evening Betta called, crankier than usual, wanting to know if I felt up to minding her son while she and her husband took part in a mathematics conference in Cagliari.  I'd been living in Milan for a couple of decades, and the thought of decamping to Naples, to the old house I'd inherited from my parents, and where my daughter had been living prior to getting married, didn't thrill me.  I was over seventy and, having been a widower for some time, had lost the habit of living with others.  I only felt comfortable in my own bed and in my own bathroom.  Furthermore, I's undergone, a few weeks earlier, a small surgical procedure which, even in the clinic, seemed to have done more harm than good  Though the doctors poked their faces day and night into my room, to tell me that everything had gone fine, my hemoglobin was low, my ferritin was poor, and one afternoon, I saw small black heads, plaster-white, stretching toward me from the opposite wall..............................................
(stopping here as this is an extremely long intro)

What do you think? Would you read more?
Posted by (Diane) Bibliophile By the Sea at 10:18 AM 22 comments: 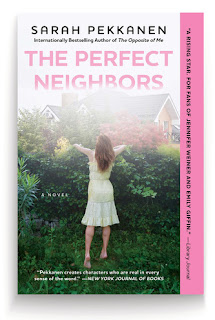 The Perfect Neighbors, takes place in the lovely tree lined, neighborhood of Newport Cove, known as a great place to raise a family and a place to really get to know your neighbors.  Social gatherings and even a public list serve where neighbors are kept up to date on events, unneighborly happenings and other random posts.  Of course like most neighborhoods and families there is drama and secrets that they individuals hope to keep quiet, most of which are revealed as the story progresses.

I found this to be a light, beachy type read which might have been even a bit more fun if there was more of a mystery to it.  I will admit, the list serve posts were super entertaining, and overall, made for a fun read. 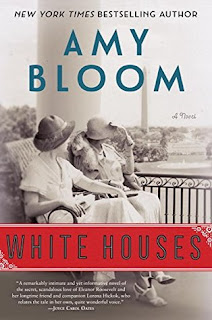 
Amy Bloom's White Houses is a fictionalized account of the FDR White House years. The story begins in 1945 just after FDR's death and moves back and forth in time.  We learn of FDR's affair with his secretary, Missy but surprisingly, very little about his relationship with his own wife, Eleanor. Instead focusing more on the, previously reported, romantic relationship between Eleanor Roosevelt and Associated Press journalist, Lorena Hickok (Hick), when the two women met in 1932 while Hick was covering White House news.

The story is told by Hick and the reader learns much about her poor childhood in South Dakota, and her dysfunctional childhood and her abusive father, We also get insight into her White House days as one of the first female journalists to have such a high profile job. Details are shared about her friendship and genuine love for Eleanor.

I found the book to be a quick read, the writing often humorous, but at times it also fell a bit trashy, which was disappointing as I loved, the in depth NF story Eleanor and Hick by Susan Quinn.

Both of these books were ones I finished in February but neglected to post my mini reviews.  I enjoyed them both even though they were nothing alike. 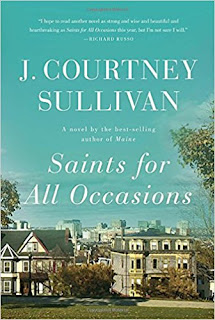 I fell in love with the cover art of Saints for All Occasions and had a hunch I'd enjoy the book, which I did.

In 1957 two young sisters, Nora 21 and Theresa Flynn 17 are bound for the US from Ireland hoping for a better life.  Nora is the older sister and a mother figure for Theresa.  Theresa is everything that Nora is not - smart, popular, out going. Nora imagines her sister will have the perfect life in America but, things don't exactly work out the way she imagined that they would.  Theresa is seduced by a married man and finds herself pregnant and Nora must protect her sister and do whatever it takes. Set in (2) time periods late 1950s and then 2009, the sisters must confront the past and deal with the choices that were made many years earlier.

I liked the great character development and found this to be an enjoyable story overall. 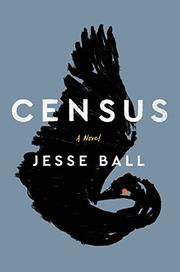 Census was a quick and somewhat unusual read but, I liked it very much.

The story begins with an unnamed man digging his own grave. The man, a widower, a former surgeon is gravely ill and his concern is not what is about to happen to him but, what will happen to his son who has Down's Syndrome.

The man decides to take a job as a census taker for the government and father and son take to the road in an unnamed country, visiting various counties (A-Z). Each chapter is short and represents one of the counties along their journey and the individuals they meet, on what will be their final journey together.

This story is a brief meditation on loss, love and the meaning of life. It was written as a tribute to the author's brother who died of complications of Down's Syndrome at the age of 24. 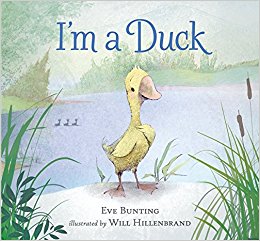 I'm a Duck, is a perfect spring or Easter, 2018 book choice for your favorite little one. Written by beloved children's author, Eve Bunting. The beautiful watercolor illustrations by Will Hillenbrand will appeal to kids and adults as well.

The story is about a sad, little duck who is too frightened to go in the water -- afraid of sinking and drowning.  His friends, Big Frog and Owl, try everything the can to encourage him to coax him into practicing his water skills.  Before long this little duck's confidence begins to grow and he is doing what ducks love to do best. 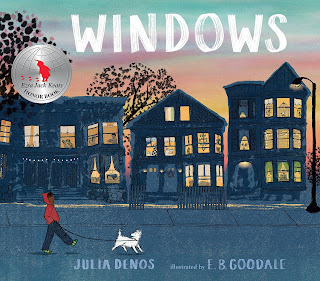 Windows, by Julia Denos is a lovely book which encourages exploring the neighborhood in which you live. Doing this at dusk, when neighbors return home from work and the lights begin to go on in the tall houses within this somewhat urban neighborhood.  A young boy takes his dog for a walk just before dark and gazes at the houses, cats and other critters along his walk. He takes time to notice the many tall windows, low windows and activity in his neighborhood but, ultimately returning home to his own house and the windows he loves best.

The sparse prose does not detract from the overall charm of this book.  The vivid, detailed illustrations throughout by, E.B. Goodale, make this a book that children will want to choose again and again. 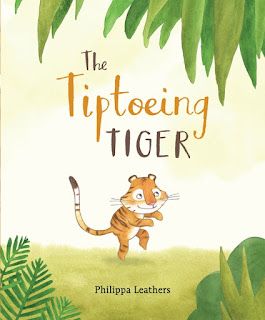 The Tip Toeing Tiger by Philippa Leathers is sure to appeal to your preschool child.  What kiddo does not love to tip toe around and try to scare someone?  Such is the goal of Little Tiger.  He's small and clumsy and in the end he scares himself by seeing his own reflection in a pond.

Recommended
Posted by (Diane) Bibliophile By the Sea at 2:21 PM 5 comments:

I've been a bit lax with the blog these days but,  I'm still enjoying reading as much as ever.  Here are the new books which arrived by mail over the last month.  Don't they look good? 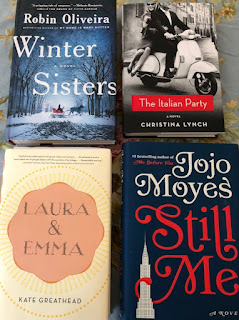 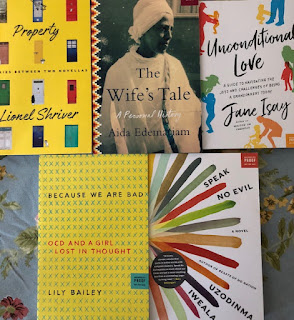 Every Tuesday Vicki @ I'd Rather Be at the Beach now hosts First Chapter First Paragraph Tuesday Intros, where readers share the first paragraph, maybe two, of a book that they are reading or plan to read soon. This week's book is our book group selection for March. 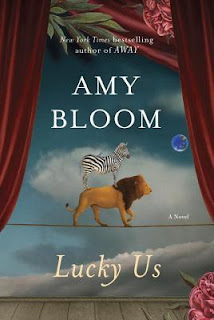 I'd Know You Anywhere

"MY FATHERS WIFE DIED. MY MOTHER SAID WE SHOULD DRIVE down to his place and see what might be in it for us.

She tapped my nose with her grapefruit spoon. It's like this, she said.  Your father loves us more, but he's got another family, a wife, and a girl a little older than you.  Her family had all the money. Wipe your face."

Based on the intro, would you read more or pass on this one?
Posted by (Diane) Bibliophile By the Sea at 11:47 AM 14 comments:

Books and Movies for February 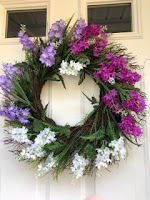 I knew it was risky hanging my new spring wreath earlier this week. Today we are in the midst of a Nor'Easter! Fortunately, for us, so far it's just 45MPH winds and heavy rain. Better this than snow at this point as long as we do not lose power.

My Book Group read for February was: Girl on the Train; Paula Hawkins. It was a reread for me.  It made for a lively discussion and I enjoyed the refresher. Only (1) club member did not like the book!

How was your February?
Posted by (Diane) Bibliophile By the Sea at 2:00 PM 29 comments: