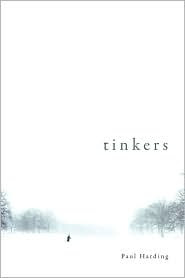 I am not really sure how I feel about a book that has won the 2010 Pulitzer Prize, is only 191 pages long, but took me almost (2) weeks to finish it.  Such was the case for Paul Harding's prize winner: Tinkers.

I thought this novel it was a combination of beautiful and flowery writing, with a boring memory based story.  For me, no matter how great the writing is, if the story doesn't work, it is tough to finish the book.

Briefly, Tinkers, is a story of three generations of New England men. We learn about them basically through the memories of a dying man.  George Washington Crosby spent his days repairing clocks, but now as he lies confines to his hospital deathbed, surrounded by clocks, dying of cancer and renal failure. He has nothing but "time" to reflect on the past.  As George prepares to be joined once again with his father Howard, who predeceased him, he reflects on what he remembers of his father's life. Howard was a Tinker, who traveled door to door selling his wares, up and down the coast of Maine.  His life was one of poverty, and, in addition,  he suffered from epilepsy. Since little was understood about epilepsy in the early 19th century, his wife thought he was mentally ill. When Howard learned that his wife was planning to have him institutionalized, he decided to abandon his family.  (Yes, there is a little more, but blah, blah, blah).

As a New Englander, I loved the imagery of the 19th century New England landscape. I thought the cover art was perfect for this cold, bleak novel set in Maine. The story line, or lack of a working plot just did not work for me. I thought the metaphor of time and life, just tick, tick, ticking away was, in my opinion, enough to depress even the most cheerful readers.  Had it not been that this book had won the Pulitzer Prize, I think I might have abandoned it early on.  I think this is one of those books that lovers of literary fiction will need to try for themselves and decide.