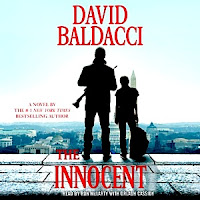 I'm not a big fan of novels about spies, secret operatives or hit men, but David Baldacci is one author who hasn't disappointed me so I decided to give his most recent book, The Innocent, a try in audio book format. The book was read by Ron McLarty and Orlagh Cassidy -- both did a great job.

In this story Will Robie, is a hit man for the US government.  His targets typically are terrorists who are planning to harm or threaten the safety and security of others. He is very good at what he does, but there is something about a particular assignment he's given that doesn't sit right with him. He refuses to do what is expected, making him the hunted by those he works for.

While Robie is on the run he meets a fourteen-year old girl named Julie Getty who is also running for her life Julie's parents have been murdered and she may now be a target herself.  Against his better judgment, Robie can't run away from her, but he has no idea what he is getting into.


This story is fast paced and takes the reader on a wild ride. Numerous twists and turns had me paying extra close attention to what was going on. I found myself having to listen to a bit more and a bit more, finishing the audiobook much sooner than I expected to. There are some heart-pumping moments, and several sub-plots as well.  It's one of the books where you can almost imagine yourself watching the action. The sound effects used in the audiobook intensified this effect, and readers who read this one will be anxious to see how the story lines all tie in.
Posted by (Diane) Bibliophile By the Sea at 8:43 PM