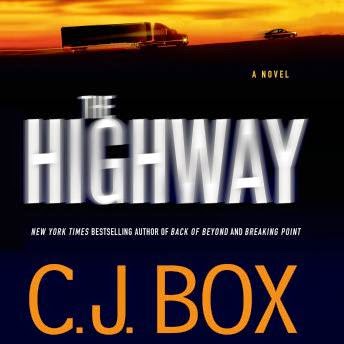 
Imagine you are a woman driving alone at night on a somewhat deserted "highway” and your car breaks down. Your cell phone service is iffy at best. Now imagine an evil trucker who preys upon women, a trucker who calls himself, “Lizard King” and he is more than willing to take advantage of that situation.

In the past "Lizard King" normally targeted hookers who worked the truck stops along the highway, this time his potential prey is two teenage sisters. Sixteen year-old Gracie Sullivan and her boy crazy, sister Danielle, eighteen, The sister have no idea what they’re in for as they head cross country to spend Thanksgiving with their father and Danielle decides to take a detour to see her ex-boyfriend Justin. When Justin becomes concerned that he has lost contact with Danielle by cellphone, he alerts his father, Cody Hoyt, an investigator for the Lewis and Clark County Sheriff’s Department.

Although "The Lizard King" and all of his twistedness enters the novel early on, the story moves from one plot location to another, which was a bit annoying on audio. At one point my husband asked if we were still listening to the same book and “what happened to Lizard King?”

Best described as a psychological thriller, the story gives you a heavy dose nail-biting tension and physical violence at times as well. The story is told from multiple POV and there are quite a few characters, many are law enforcement people -- some good guys and some bad. The author does a great job ratcheting-up the tension and giving the reader a feel for the Western landscape as the reader is transported from Colorado to remote areas of Montana. We enjoyed listening to the parts where Lizard King was featured and, we felt that the narrator Holter Graham was a good match for this story,  but our overall impression of this thriller was "just okay."