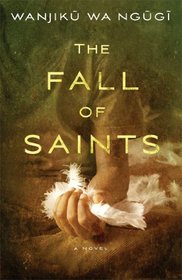 This debut novel started out so strong and hooked me quickly, but then slowly became confusing and outlandish as well.

Mugure is an expat from Kenya now living in the US. She has a nice life living in New York and is married to Zack, a successful attorney that she met while working at his law firm.  When the couple is unable to conceive  a child they adopt a little two-year old boy named Kobi.

One day several years after the adoption, she takes her husband's car instead of her own she finds a piece of paper with her son's name and a phone number on it. She's curious, but it isn't until later when she is searching for something in the office that she finds another suspicious bit of information with similar info that makes her question whether her husband and the agency that handled the adoption might just be hiding something from her.

Unable to leave her happy life in Riverdale, NY as is, she begins her own private investigation involving her best friend Melinda, who was once married to Zack's friend, a man who went from rags to riches supposedly in the landscaping business, but may have been involved in transporting illegal immigrants for a fee as well.

In her sleuthing she finds the adoption agency has closed it's doors seemingly overnight and is now a curio shop. Her amateur investigation takes her from soccer mom to all sorts of dangerous people and locales, including a trip back to Kenya to find out more about her son and the truth about his adoption.

The story was riveting in parts, yet so far-fetched and all over the map at times that it became hard to follow.  I don't want to dissuade readers from trying this debut novel as part of the story was really addictive, it's just that the story got too out of hand and it became too confusing to follow who was involved in the possible illegal and why.