This is Your Life Harriet Chance; Jonathan Evison 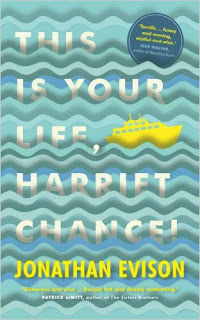 This is Your Life, Harriet Chance; Jonathan Evison
Algonquin - 2015

This is Your Life, Harriet Chance is a wonderful story told through the POV of Harriet, a 78 year old widow who had been married for 55 years.

After her husband Bernard passes away, Harriet learns he had planned an Alaskan cruise for two. With the reservations already in place, she decides to go it alone, hoping this will be just the new start she needs in life. She takes a yogurt container with Bernard's ashes and an unopened letter from her longtime friend for company.

The cruise, buffets, entertainment, alcohol and time for reflection on her life thus far, some good times, some sad times, and some downright bad times, all have made Harriet the woman she is today.  Her husband's imagined voice frequently appears throughout these moments of reflection.  She also gets an unexpected appearance on the cruise by her daughter who she has had an on again, off again relationship with.

I don't want to say too much about Harriet's story, which I think will have a wide appeal, especially among women.  It covers so many issues that many women face throughout their lives, beginning with painful childhood memories, sexual harassment, abortion, drugs, infidelity, marriage and even child rearing.

Considering the issues covered, I was pleased that I never found this story depressing, but rather touching and even funny at times.  As a wife, mother, and a woman with plenty of life experience, it was easy to find something relatable in me to Harriet as I read her story.

The story is told in short chapters with timelines for titles, beginning with her birth through the present, although the focus is mostly on the present day.  Harriet was an endearing character.  Her selfish children were another story, but they did not detract from my enjoyment of this novel.

The overall message was one of how life has a way of marching on, not always working out how we thought it would. It's about putting on our big-girl pants and learning to live with disappointment and setbacks despite it all.  There were a few really thought provoking passages, but I didn't quote them as I read them a second time I noticed that one in particular contained a spoiler.

Add this book to your reading list if you enjoy stories about family dysfunction and lovable heroines.