My Sunshine Away; M.O. Walsh 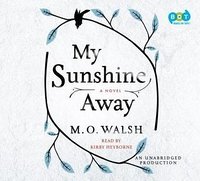 I finished this book almost a month ago and, I really loved it.  Although I had both the audio and the eGalley, I especially loved the audio as the Kirby Heyborne was an excellent narrator.

The story begins in 1989, Baton Rouge, LA, where a popular, fifteen year old girl named Lindy Simpson is raped as she is returning home on her bike one evening.  Attacked from behind, she's unable to identify an attacker, however there are four possible suspects.

Told from the POV of one of the suspects, we get a well drawn look into the background of each suspect.  To make the story all the more interesting, the narrator also has an unhealthy crush on Lindy, almost to the point of an obsession. He seems to monitor her every move, often from the privacy of his bedroom since they are neighbors.  I don't want to say much more because I don't want to spoil the story -- just read it.

It's hard to believe that this is a debut novel. The writing is so good and very atmospheric and the characters finely tuned. The story hooked me from the very beginning. Readers who love coming of age stories, especially ones told through memory and reflection will enjoy this one.  Highly recommended.