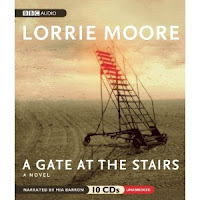 Has anyone read this book?  Did I miss something?  I know I can't be the only one who thought this book was awful. I listened to about (7) of the (10) cds from this audio book, and had to skip to the last disc and end my pain.  The narrator: Mia Barron was fine, it was the novel itself that I had a problem with.

(I should have read this Publisher's Weekly blurb before, and not after):

Starred Review. Moore (Anagrams) knits together the shadow of 9/11 and a young girl's bumpy coming-of-age in this luminous, heart-wrenchingly wry novel—the author's first in 15 years. Tassie Keltjin, 20, a smalltown girl weathering a clumsy college year in the Athens of the Midwest, is taken on as prospective nanny by brittle Sarah Brink, the proprietor of a pricey restaurant who is desperate to adopt a baby despite her dodgy past. Subsequent adventures in prospective motherhood involve a pregnant girl with scarcely a tooth in her head and a white birth mother abandoned by her African-American boyfriend—both encounters expose class and racial prejudice to an increasingly less naïve Tassie. In a parallel tale, Tassie lands a lover, enigmatic Reynaldo, who tries to keep certain parts of his life a secret from Tassie. Moore's graceful prose considers serious emotional and political issues with low-key clarity and poignancy, while generous flashes of wit—Tessie the sexual innocent using her roommate's vibrator to stir her chocolate milk—endow this stellar novel with great heart.

MY THOUGHTS - I'm not sure what I was expecting, and honestly, I don't even recall reading any reviews about this book when it was released in 2009. I just saw it on the library shelf and went with it thinking it might be good.

The  story for one had too many sub plots that never really all came together. It made an already disjointed novel drag on endlessly. In addition, there were unappealing characters, a narrator who rambled on and on -- saying very little, and one tragedy after another. On top of this the author's use of metaphors, flowery language, and attempts at humor only made matters worst.


This book was PAINFUL. (Rating 1/5 stars)
Library Audio Book
Posted by (Diane) Bibliophile By the Sea at 11:01 PM