Of Mice and Men; John Steinbeck 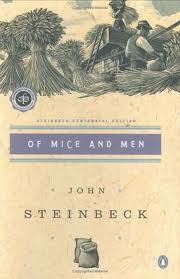 Title: Of Mice and Men

Edition: softcover
Source: my shelves
Date Completed: 2/13/2011
Setting: Soledad, CA area
Rating: 5/5 stars
Recommend: Yes
I have not read this book since high school (a long time ago), so I actually had forgotten how much I loved this book, probably more this time as it was read for pleasure.
Briefly, Of Mice and Men

, tells the story of two drifters, Lennie, a mentally challenged, gentle giant, and George, the man who looks after Lennie.  They are just two of the many itinerant labors who search for jobs in the fields of California during the Depression. George and Lennie hope that at some point, they will achieve the American Dream of owning a small piece of land and having a few rabbits as well, because Lennie loves small little critters and having something soft to pet.

Lennie is extremely loyal to George, and although he has caused some problems as the two travel from place to place trying to find work, the one constant is that they have each other.


"I ain't got no people...'Course Lennie's a God damn nuisance most of the time, but you get used to goin' around with a guy an' you can't get rid of him."

George is often angry about some of the things that Lennie does, and feels burdened, believing that Lennie is holding him back in life.  Lennie, in turn worries that George may leave him some day. In addition to george and Lennie, there are some minor characters in this story: Crooks, Slim, Curley and Carlson, and themes of loneliness surface again through these men. Throughout this story there is a lot of foreshadowing which occurs, preparing the reader for a some of the bad things that are about to take place. There are several issues explored in this novel: the mentally challenged individual, poverty and racism, and although the characters here are different, their issues are often the same, leading each to experience many of the same disappointments in life.

For those of you who have never read this amazing story (under 130 pages),  Of Mice and Men

, packs a  mighty punch for such a small book. HIGHLY RECOMMENDED.

This is about the fourth Steinbeck novel I have read in the last few years, and honestly, I am always amazed at how much I love his work.  My next Steinbeck novel will be East of Eden

, a somewhat hefty tome, but I am sure it will be well worth my time.  Have you read any Steinbeck books that you really loved?
Posted by (Diane) Bibliophile By the Sea at 8:41 PM