a couple of audiobook reviews from early March

Not sure whether I've read this author previously, if so it was years ago.  In this suspense novel there are several story lines to digest.

In one case Robin Lockwood is a Portland attorney who is representing Randy Stark, a young woman who accused a college athlete of rape.  The man, Blaine Hastings Jr., is now in prison. When another rape occurs and the DNA is a match to Blaine's, those involved in the case are baffled. How can this be as Blaine doesn't have an identical twin?

For a fairly short novel there was way too much going on and, I thought this novel was short on substance. I would have preferred more in-depth story lines as some of this felt rushed and disjointed. 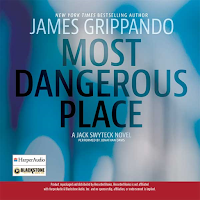 Jack Swyteck series -  In this installment (haven't read others) Jack Swyteck, a Miami defense attorney is one of the good guys, he's married and has a young daughter.  As the story begins he is on his way to the airport to meet an old friend named Keith, a Hong Kong banker. Keith is accompanied by his lovely wife Isabelle (Issy) and their 8 year old daughter who needs a rare surgery to restore her hearing. Just as greetings are exchanged Keith's wife is approached and arrested. She is charged with the murder of an ex-boyfriend who she claims sexually assaulted her in college.

Jack his his work cut out for him after agreeing to represent Issy.  The more he digs into what she has told him about the incident, the less confident he is that he's getting the whole story.

I thought the audiobook was very good and it kept me guessing. There are plenty of twists and surprises. I hadn't read any of the earlier books in the series and it really didn't seem to matter either.
Posted by (Diane) Bibliophile By the Sea at 12:30 PM