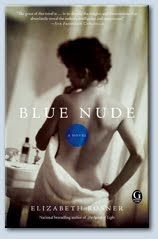 Did you ever read a book that was so good, that you read it twice, back to back? Such was the case for me with  Blue Nude

, by Elizabeth Rosner. A short novel, just 200 pages, but a fantastic book that completely wowed me.

The story is about two artists -- initially strangers whose lives, past and present intersect after a chance meeting.  Danzig is a 58 year old German-born painter. He was born days after WWII to a cold and abusive father and a submissive mother. Danzig and his sister Margot were witness to the cruelties of their father, who although never fully revealed, appeared to play a significant role in the elimination of the Jews during the war.  To cope with the ways of his demanding father, at an early age, Danzig found comfort in painting and art.

"Still, his father always found ways of tormenting him, made sure he was given jobs to do before he was allowed to eat his meal or play or read a book. He was inspected for cleanliness in the mornings before going to school, and he was sent to bed without food if he ever left a job half finished--or worse, if he had said he had done something when actually he hadn't"........................."He was on his own, and his father was the enemy, and it was all very clear and without alteration."

After tragedy strikes, and only unhappy memories remain, Danzig leaves Germany for America. He moves to San Francisco to pursue a career in art. He works as an art professor at the Art Institute in San Francisco.

Merav, is a young, Israeli born woman who makes a living as a nude model.  When she finds work posing for Danzig's art class, she is careful not to speak fearing that Danzig will pick up on her accent, as she has with his.  Merav, too, has had her share of tragedy, and years later the nightmares still haunt her. There is an unspoken interest by the two that keeps them connected. She feels at peace while posing for Danzig's class. For Danzig, in Merav he finds his creativeness returning after 5+ years. He asks her to pose for him privately in his studio. Merav is totally in her comfort zone when posing for art students........

"She felt like a swallow, dipping and soaring at twilight. She felt her body touched without being touched".

"Sometimes Merav thinks that modeling is one of the ways her physical life resembles that of her childhood on the kibbutz."

With out giving too much of the story away, I'll just say that I was completely taken by this story. The writing is beautiful, the characters so well fleshed out; I felt deeply for both of them.  A redemptive story about the power of the human spirit as each individual tries to cope with the demons of their past. Blue Nude

, is a story you will not easily forget.

Originally published in hardcover by Ballantine in May 2006 and reissued in 2010 in paperback by Gallery Books (Simon & Schuster). I can't believe that this wonderful book has not received more accolades. Do yourself a favor and read this book, you will be glad you did.

Rating - 5/5 Stars - Complimentary Copy
Posted by (Diane) Bibliophile By the Sea at 9:14 PM