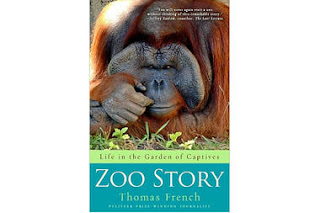 Thomas French, Pulitzer Prize winning reporter for the St. Petersburg Times has written an eye opening book about zoos, well at least one zoo in particular. In Zoo Story

,  French focuses his attention on the Lowry Park Zoo in Tampa, Florida.  Not only does the author reveal what life is like for the animals in captivity, but he also focuses of the politic and, power plays involved in zoo operations, which were not always in the best interest of the animals. The former CEO, Lex Salisbury, AKA El Diablo Blanco (White Devil), was forced to resign in 2008. This particular zoo in Tampa,  was shut down in the 1980s due to horrific conditions. It was reopened and transformed years later, but one must ask the question -- at what cost to both the animals and the staff?
The story begins with (11) elephants from a herd in Swaziland, South Africa being air lifted in a Boeing 747. Traveling from South Africa to Tampa, Florida, the new home for the majority of this group, at a cost of $12,000 per elephant. Tranquillized and traveling in cages on this long journey alone stirred up much controversy from animal rights advocates, debating the merits of living in one's natural habitat, despite overpopulation, versus the new contained environment created at the zoo. Elephants from the herd are often slaughtered to contain overpopulation, and  because of a shortage of food.
This book was very informative, and the six year's of research conducted by the author shows. I liked the fact that he told it as he saw it, and it is clear that he did not sugar coat anything.  The book held my attention throughout, however, I felt the story was too focused on zoo operations and management for my taste. I did not realize this would be the case when I began the book. I was hoping to learn a lot more about the lives of the animals in captivity there, than I did.  Despite this, the book is solid, and would probably appeal to most people with a genuine interest in animal welfare. RECOMMENDED
Rating - 4/5 stars - Library Book
Posted by (Diane) Bibliophile By the Sea at 8:01 PM