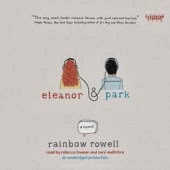 Eleanor & Park, is a story which takes place in 1986 in Omaha, Nebraska over the course of one school year. It's the story of two teens who don't fit into the mainstream very well. Eleanor is the new girl who stands out at her new school. She has flame red hair, bigger build and dresses different. She is picked on constantly by other girls and the target of mean pranks as well.

Park is half-Korean and although his life is a lot better than Eleanors, he feels like a misfit. He isn’t new in town, but feels isolated because he like comic books and music that is different to most teens. When no one else will let Eleanor sit down on the bus on her first day at school, Park motions to her to sit next to him. Each day they sit next to other and begin to talk.  Neither has ever been in a relationship before, and slowly their friendship blossoms to something more.
Park's relationship with his parents is strained at times, but his home is safe, he has plenty to eat and his parents are in love. For Eleanor, Park is the only thing that makes her life worth living. Her home life is horrible, she lives with her mom and abusive, hard drinking, step-father Ritchie. She shares a room with her four younger siblings, and their bathroom does not even have a door on it.

What a great story!  I am so happy I took the time to listen to this book that everyone has been raving about.  The readers, Rebecca Lowman and Sunil Malhotra perfectly captured these two teens.Their relationship seemed very realistic. I felt like I experienced their joy and their pain, rooting for them all along. Heartbreaking at times, it is a story that I highly recommend.