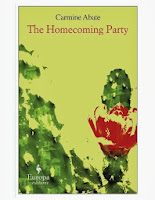 The Homecoming Party by Carmine Abate was a short novel (fewer than 200 pages) which I enjoyed.
The story begins with a father and son enjoying a bonfire on Christmas Eve outside of their village church.   It is a happy day for Tuillio and his son Marco, as work is scare in Hora, a village near Calabria in Italy. Trulio has had a hard time finding enough work to support his family, so he often must travel to France and work in dangerous conditions like coal mining, in make a living. He has just returned from one of his absences.

While he is away, Marco, his preteen son, likes to think he is the man of the house, watching out for the family: his mother, his grandmother and older college-age, half-sister, Elisa who comes home from school on the weekends.

As father and son catch up at this latest Christmas Eve bonfire reunion, the reader learns about Trulio's past. While Tuillio tells of things that happened to him while he was away, Marco recalls the day that he was roaming the rural terrain with his dog Spertina. On that particular day, he sees his sister lying down in a field with her blouse opened. He also catches a glimpse of an older man with “salt and pepper hair”.  Although Marco does not know it, the  “salt and pepper hair man”, is not a stranger to Trulio and, even Spertina the dog is familiar with the mystery man.

I had a hard time putting my thoughts to paper on this one even though I liked it. It was a coming of age story and a story about a fractured family as well. It’s difficult to say too much about this one without revealing spoilers, except that there was a shocking revelation that I had not expected.  The writing and translation was very good. I especially loved the descriptions of the region, and its people. Although people had to endure difficult circumstances in order to take care of their family, life did not seem all that terrible and had a nice slow-paced feel. Unfortunately, I never got a good feel for when this story took place, and that I would have liked to know.  I loved that I was able to read this one cover to cover in just a few hours. It really held my attention and loved how it packed a punch as well.