The Collector; Nora Roberts and The Christmas Light; Donna VanLiere 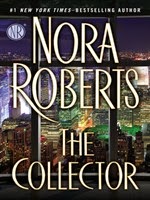 Lila Emerson makes a decent living as professional house sitter, and she enjoys her work.  She's a bit of a voyeur especially when her house sitting assignments involve the high rise buildings set so close together in NYC.  One day while viewing unsuspecting people through her binoculars in one of the buildings across the way, she witnesses something she wished she hadn't.  A women is struck by a man, and then pushed through the window, plunging fourteen floors below to her death.

She notifies the police and while at the police station meets a man named Ash, whose half brother, Oliver is believed to be the man who pushed the woman to her death.  The problem is Oliver is now dead from a suspected drug overdose in what police believe is a murder-suicide.  Brother Ash is not so sure, and believes that there is more to this case than meets the eye. Lila on the other hand has gotten herself in much deeper than she would have liked, and her life at this point may even be in danger.

In true Nora Roberts style, this book has a bit a everything, mystery, intrigue and even romance.  The audio book was read by Julia Whelan who did a great job.  This was a good book to listen to during this hectic time of year.
4/5 stars
(library audiobook)

Christmas time in the small town of Grandon brings together local people for the performance of the Christmas Eve Nativity. Five very different people are brought together to share and discover the real meaning of Christmas, the season of hope.

A pregnant teen, lost and confused by her situation, a young widow and her six year old daughter who have not gotten over the death of a spouse and a dad, and a divorced contractor who comes to town to visit his aunt along with his six year old daughter (can you tell where this might be going?)

Although each of the characters is facing some sort of struggle, I found it difficult to connect with any of the characters.  The message of the book is about having hope and believing and opening up yourself to new possibilities.  Although the story seemed contrived in parts the author did a nice job of pulling it all together.  It's a very short read that many readers might enjoy this holiday season.