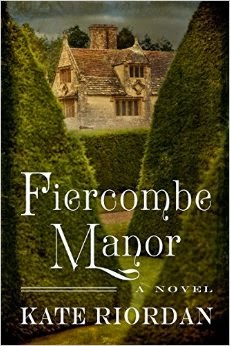 A story with an isolated Gothic manor as the setting is enough to make me want to read a book.  In Fiercombe Manor the story begins with a young woman named Alice Eveleigh who becomes pregnant by a married man. It's 1933 London,  so as not to disgrace her family she is sent by her mother to Fiercombe Manor, to wait out her days and have her baby without shaming the family.

The housekeeper at Fiercombe, Mrs. Jelphs, is someone Alice's mother feels she can trust to keep Alice's secret. When Alice arrives things seem unusually quiet around the manor. The owners the Stantons are rarely around, so except for the housekeeper and caretaker, Ruck, and an occasional visit by Tom Stanton, the place is quiet. It leaves Alice plenty of time to wonder about the history of the manor. She tries to get Mrs. Jelphs to talk about the history of Fiercombe and about the people who have lived there past and present. As the former maid to Lady Elizabeth, Mrs. J is reluctant to say too much at first, but gradually Lady Elizabeth's story is revealed through old letters and journal entries, and the reader learns of the manor's tragic past.  What Alice learns makes her fearful as there are certain similarities between the two women.

The story is told in alternating chapters in the first person POVs by Alice (1930s) and then Elizabeth (1890s). The author did a nice job describing surroundings and giving the characters some depth. However, for a Gothic novel, this one wasn't as atmospheric as others I have read.  There was one ghost aspect which really felt disappointing.  The story was rolled out in a slow and deliberate way, but I have to admit that this book took me over three weeks to complete this one. It's over 400 pages and, once I put it down for a few days, it became harder to pick up.  Overall, I think this book is still worth trying for fans of historical fiction.