In 2016 I struggled to review every book that I read and, as a result I felt like I didn't give my reviews my best effort. After seeing Kathy's new format for 2017, I decided to give this weekly update, with mini reviews, idea a try.  I'll still be posting my weekly, First Chapter link up every Tuesday as well.

The first week of the new year found us eating out plenty thanks to several wonderful and appreciated gift cards from family.  We also received movie gift cards and got to see (2) newly released movies (both wonderful).

This movie was powerful and emotional and sure to win awards.  The story tales place in the 50's and early 60's and deals with prejudice, the wounds inflicted by those who raised us and the sacrifices people make on behalf of others. It's obvious that this movie was meant to be a play as there are very few scene changes: One house, front porch, back yard and kitchen and dining room scenes for the most part and, there is a small cast of characters.  Denzel Washington's performance was outstanding. (BE SURE TO SEE IT)

A wonderful, feel good movie about three brilliant African American women who were instrumental in helping to launch our space program. 1961, Jim Crow era, it wasn't easy for them but, these feisty women persevered and showed the white men just what they were capable of.  One of the best movies I have seen, rated PG. Be sure to take your young daughters to see this movie. You don't often see a movie where the audience cheers several times throughout the movie.  It's a movie that demonstrates that girls/women, regardless or their skin color can do anything they set their mind to. (BE SURE TO SEE IT) 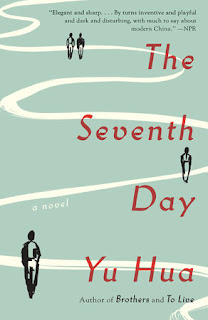 First Paragraph ---
"The fog was thick when I left my bedsit and ventured out alone into the barren and murky city.  I was heading for what used to be called a crematorium and these days is known as a funeral parlor.  I had received notice instructing me to arrive by 9:00 a.m., because my cremation was scheduled for 9:30."

(My Thoughts) I actually started this book the end of 2016 but just finished it this past week.  I had some trouble with this book which I'm assuming was due to the translation (Chinese to English). The story begins at the end and goes back over a seven day period. A middle aged man, Yang Fei dies and receives a notice instructing him to show up for his own cremation. He washes, dresses and shows up for the event but, he fears no one will show up for his funereal because he's divorced and has no children.   When it's his turn for the cremation, he leaves and decides to search for his adoptive father who he assumes has died as well.  ver the next seven days he meets the ghosts of others who have passed away, eventually circling back and meeting his father.  This story wasn't all that long and at times had a feel of the way H. Murakami writes. This took me longer than normal to read and, I'm glad I gave it a try but, it was challenging and is just not a book that will appeal to every reader. (3.5 stars) 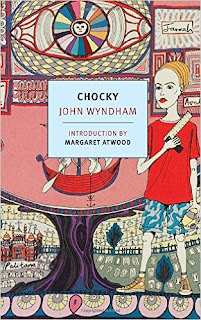 First Paragraph --
"It was the spring of the last year that Matthew reached twelve that I first became aware of Chocky.  Late April, I think, or possibly early May; anyway I am sure it was the spring because on that Saturday afternoon I was out in the garden shed unenthusiastically oiling the mower for labours to come when I heard Matthew's voice speaking close outside the window.  It surprised me; I had had no idea he was anywhere about until I heard him say, on a note of distinct irritation and apropos, apparently, of nothing:

(My thoughts) -- When I saw that the intro for this book was written by Margaret Atwood, I had to try this book. Fewer than 200 pages, Chocky,  is a story about an adopted, twelve year old boy named Matthew Gore who lives in London and has an imaginary friend. When his parents become concerned they seek help and we learn that Chocky is an alien who has come to explore earth to see whether it's habitable.  Matthew and Chocky have a unique relationship and, the questions posed by Chocky are deep, interesting and worth pondering.  The story made me think about the environment and why we do some of the things we do. Narrated from the POV of Matthew's concerned father, it's an original and optimistic story that was very different from what I tend to generally read. It made me curious enough to take a peek at other books by this author. (4.5 stars)

New Books
(sent to me by publishers) 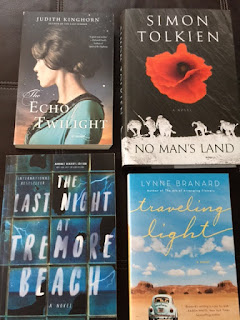 Enjoy your weekend everyone!
Posted by (Diane) Bibliophile By the Sea at 9:34 AM