This has been a somewhat lazy week for me and, I only read (1) book but, it was a good one.  I did watch (2) movies : Love the Coopers (2015), Diane Keaton, John Goodman and Steve Martin but, although parts were fun, I didn't love it .  I also watched, Postcards From the Edge (1990): Meryl Streep and Shirley MacLaine which I'd seen before and enjoyed.  We also O.D'd on Sopranos episodes, Season 3.

I did get out to yoga class 3x and, I also caught up with (2) high school friends for lunch - always fun to catch up and chat about past and present. 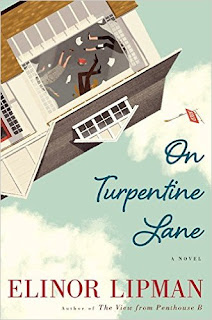 "IF I HADN'T BEEN NAIVE and recklessly trusting, would I ever have purchased number 10 Turpentine Lane, a chronic headache masquerading as a charming bungalow?  'Best value in town,' said the ad, which was true, if judging by the price tag alone.  I paid almost nothing by today's standards, attributing the bargain to my mother's hunch that the previous owner had succumbed while in residence.  Not so off-putting, I rationalized; don't most people die at home?  On moving day my next-door neighbor brought me a welcome loaf of banana bread along with the truth about my seller. A suicide attempt...sleeping pills...she's saved them up till she had enough, poor thing. And who could blame her? 'Strong as an ox,' she added. 'But a whole bottle?' She tapped the side of her head."

(My Thoughts) I've enjoyed many of Elinor Lipman's earlier novels, The Inn at Lake Devine, was an all time favorite, but, I must say, On Turpentine Lane, runs a close second -- such a fun read.  Our protagonist, Faith Frankel has a so-so job in the Development Department of a private day school that she had attended.  Her boyfriend Stuart, is a loser who has taken advantage of her and is now off on a cross country walk to find himself.  Before leaving he gives Faith a piece of red-string (a symbol of his commitment to her). He also asks for her credit card to help with expenses. Meanwhile, Faith has purchased a rock bottom priced 2-bedroom - 1 - bath, bungalow, "On Turpentine Lane", unaware of the houses history and that the police will soon be knocking on her door.  life is interesting for Faith; she has a charming new office mate named Nick, a meddling mother, a father who is having a mid-life crisis,  a bachelor brother and added to the mix are a few other quirky characters that together make this story shine. Lipman's sharp dialogue and insight into the human psyche made this novel such a treat. (4.5 stars - be sure to try it)

Have a Great Weekend!
Posted by (Diane) Bibliophile By the Sea at 12:00 AM