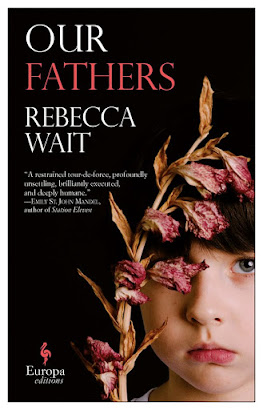 Our Fathers; Rebecca Wait
Europa - 2020
On a quiet, isolated island in Scotland, is a small community where everyone knows everyone else by their names. Twenty years earlier residents were shocked to learn that one of its own, John Baird, killed his wife Katrina, young son Nicky and infant daughter Beth before turning the shotgun on himself.  Middle son Tommy, 8 at the time, was upstairs hiding in a closet when the massacre occurred.  What causes a man to suddenly commit such a horrible act?
Fast forward twenty years and Tommy, has now returned to the island for a visit where his Uncle Malcolm, his father's brother, still lives. Tommy had lived with Malcolm and his now late wife after the incident, until he was old enough to leave the island.  Tommy is seeking answers to the many unanswered questions he has about his parents in the hopes it will ease his troubled soul.  Each day as he speaks with different people who knew his family he begins to see a more completed puzzle of the family he never really knew.
This is a beautifully written and thought provoking look at the human psyche. Tom's character is so finely drawn: quiet, introspective, angry about his past yet reflective. He also loves literature. He's constantly second guessing his past actions; his memory plays tricks on him.
The story is gripping and raw at times, yet so hard to put down. Honestly, this story is so well written, it's my favorite book of 2020 thus far.  I hope you will try it. I borrowed my copy from the library.
a few quotes that stuck with me --
Posted by (Diane) Bibliophile By the Sea at 12:26 PM