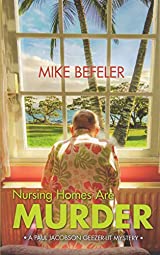 Eighty-year-old Paul Jacobson has been on vacation with his new wife and family in Honolulu when he is asked to go undercover.  The job is to pose as a nursing home resident to help crack a case in a home where a few female residents have been robbed or sexually assaulted during the night.  Paul agrees and his wife Marion is housed in a condo next door to the facility for the interim.

Paul has a great memory by day but, come sundown confusion sets in and he must resort to writing things that happen in a journal.  Paul and his blind, war veteran roommate get along great. As Paul snoops around meeting residents and asking questions, it seems like there are several potential suspects to keep tabs on.

I was in need of a quick read, something totally different pre-election and, this cozy mystery that sat on my shelves for years fit the bill.  I liked the humor, lots of funny things happened even though it was sometimes over done, I liked it. The quirky seniors made me smile.

I learned afterward that this was a series book (book 6 of a 6 book series with Paul Jacobson as amateur - sleuth). Since I hadn't read anything else by this author,  I wondered what  Paul's job was pre-retirement? I'm guessing he might have been a detective as why would he have been asked to go under cover?  Despite stepping in mid-stream, I still had fun with this one.