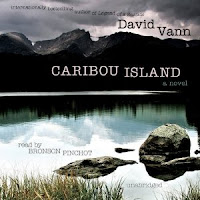 Source: Library (audio) and Publisher (ARC)
Date Completed: 2/23/2011
Setting: Alaska
Rating: 4/5 stars
Recommend: Yes
Gary and Irene are a unhappily married couple of 30 plus years. Their marriage in unraveling, now that their two children, Rhoda and Mark, are grown.  Gary, is obsessed about building a cabin from scratch on a remote island  in Alaska, believing that living off the land will bring him the joy that he has long searched for.  Gary is a bitter, angry man with unfulfilled dreams, all of which he blames on his wife Irene. He claims she is the reason he never completed his dissertation in Medieval Studies, and never became a professor. Instead he went along with her idea of a family, and spent much of their marriage supporting the family by fishing and boat building.

Irene, a former teacher knows better. She sees Gary's latest project as just another one of many that will end in failure. She thinks of this idea as "his idiot project -- a 16x12 unheated cabin in the woods".  Irene goes along with the idea grudgingly. She even helps him haul supplies to take over by boat, and haul logs for the cabin in the pouring rain. Irene even suspects that the cabin is Gary's first step to leaving her.

The first paragraph of this debut novel sets the bleak tone for the entire book, and it packs a wallop, as Irene is speaking to her daughter Rhoda.


"My mother was not real. She was an early dream, a hope. She was a place. Snowy, like here, and cold. A wooden house on a hill above a river. An overcast day, the old white paint of the buildings made brighter somehow by the trapped light, and I was coming home from school. Ten years old, walking by myself, walking through dirty patches of snow in the yard, walking up to the narrow porch. I can't remember how my thoughts went then, can't remember who I was or what I felt like. All of that is gone, erased. I opened our front door and found my mother hanging from the rafters. I'm sorry, I said, and I stepped back and closed the door. I was outside on the porch again".

As winter approaches, the cabin is incomplete, Irene becomes ill with severe headaches and other unspecified ailments, and the couple's dislike for one another seems to intensify. Their adult children Rhoda and Mark have their own issues as well. From the very first paragraph, I was confident that this book would end in disaster, and it did. The men are intensely unlikeable in this novel. Gary takes responsibility for nothing. He blames all of his misery on his wife, and their son is a lazy misfit. The women in this novel made me angry as well; they are weak and pathetic. No one learns a thing about themselves after all that has happened to them either.  I had a love/hate relationship with this book. The writing was very very good, and the sense of place was chilling and well established. I loved the way that suspense was building throughout.  Yet, I disliked all of the characters -- they were their own worst enemies.

The audio book was read by Bronson Pinchot who did a great job, but because the tone of the novel was so depressing, listening to the audio got to be a bit much at times, so I switched to the print version after a while.  Do I recommend this book? Yes, but with reservations -- not a book to read if you are feeling a bit depressed.
Posted by (Diane) Bibliophile By the Sea at 1:15 PM