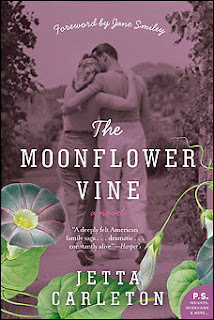 , by Jetta Carleton (1913-1999) was first published in 1962 by Simon and Schuster. The Harper Perennial edition was released in 2009, ten years after the author's death.
The story begins in summer in the 1950's as the adult children in the Soames family are visiting their parents, Matthew and Callie on their rural Missouri farm. The story begins as Mary Jo, the youngest of the four girls, tells of the annual visit to see their parents, which is both a reunion, and a sense of duty. The parents are now up in years and need help around the farm. Much of what occurs during their visits seem to be focused on the blooming of the "moonflower vine".

"The vine stormed to life, and the blooms exploded---five, twelve, a torrent of them, tumbling their extravagant beauty into the evening air"........"The blooming of the moonflowers was a kind of miracle, and like all true miracles it had the power of healing".

Although on the onset, the Soames clan seems the idyllic, happy family, all is not as it appears to be. The father Matthew, a former teacher and principal, is a God-fearing religious man, emotionally cold and distant, and yet a man driven toward wrong, and faced with guilt. The mother Callie, is good woman with a big heart, submissive and lonely, and longing for the closeness she is often denied. Bit by bit, each of the family members: Mary Jo, Jessica, Mathy and Leonie recall events from an earlier time (early 1900's), where the good times and bad times, private secrets, passions and temptations, and even sorrows, of each family member is revealed.

What was fascinating about this character driven novel, is the way the human side of each person shines through. We meet individuals who give in to temptation, make unwise choices, and then must live with aftermath. We see how choices made by one person, affect the rest of the family. Sin, lust, guilt, and forgiveness are themes that surface on a regular basis in this novel. Considering this book was initially published nearly 50 years ago, it was a bold and daring piece.  I can imagine that more than a few eyebrows were raised as romantic love, sexuality, lust and desire were prominent throughout this novel.

What started out as a bit of a slow moving story, quickly picked up and became a novel that made me anxious to read on.  Unlike anything I've read in a long while, I did enjoy this book. Sadly, it was the one and only novel published by the author.