163 - Mama: a TRUE story, in which a BABY HIPPO loses his MAMA during a TSUNAMI, but finds a new home, and a new MAMA ; Jeanette Winter 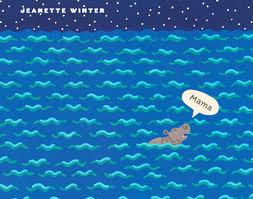 by Jeanette Winter is another sweet story, told basically through illustrations only, except for the words "mama and baby". On the last page of the book is a brief synopsis of what really occurred when a baby hippo became separated from his mother when the great waves hit following the tsunami. After struggling alone for several days, the baby hippo was rescued by Kenyan wildlife officers and brought to live in an animal refuge. There, the baby hippo adopted a new "mama", a 130-year-old giant male tortoise. And they've been inseparable ever since.

The author's illustrations demonstrate the fear and loneliness experienced by the hippo as he searched for his mama. Simplistic, yes, however, it is a very effective way to tell this story to young children.