The Emperor of All Maladies; Siddhartha Mukherjee 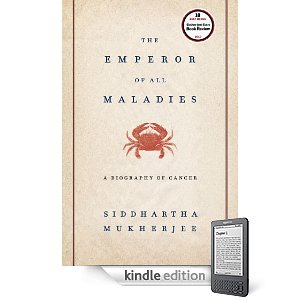 Title: The Emperor of All Maladies: A Biography of Cancer

The Emperor of All Maladies: A Biography of Cancer

, is a fascinating book about the history of cancer, a disease that would kill 600,000 people in the United States, and 7 million people worldwide in 2010 alone.  The author, an Oncologist, researcher, and professor of medicine began this book when he was a resident at Dana Farber Cancer Institute, and an Oncologist at Mass General Hospital in 2005.

Most of the information learned about cancer in this novel takes is from the early 1900's to the present, however, in 440bc, a Greek Historian named Herodotus recorded the story of Atossa, Queen of Persia, who has a "bleeding lump in her breast. Her breast was removed, however, it is uncertain as to whether the cancer had returned when she died.  There is also on record a 1,000 year old bone cancer preserved in a mummy that was a member of the Chiribaya Tribe. So it appears that cancer was present in the distant past, but that it was somewhat rare, probably because as the author writes. "people didn't live long enough to get cancer". Today since people are living longer and longer, it makes sense that more of us will die of this disease unless a cure is found, as "mutations in cancer genes increase with age".

Today however, although significant advances have been made, the war on cancer has not been won by any means. The book is loaded with interesting information, but a difficult book to review, so I thought I would share a combination of statistics, advances in treatment and quotes, that I found interesting:


"Killing a cancer cell in a test tube is easy. The trouble lies in finding a selective poison - a drug that will kill cancer without annihilating the patient"

In 1962, the drug Tamoxifen was developed for birth control, but was found to have the reverse effects, actually shutting off the estrogen signal to tissues. In 1973, V. Craig Jordan, a bio-chemist from a little known lab in Central Massachusetts found estrogen receptors were highly responsive to Tamoxifen which choke the cells growth, so a trial drug program was designed for women with advanced metastatic breast cancer, which seemed to cut the cancer's recurrence by 50% in women over 50. It lengthened survival, however, many patients eventually relapsed.

The book is full of fascinating insights of the discoveries, advances and outcomes made by cutting edge scientists of the past and present, like the discovery of radium oncology in the early 1900s, mammography, PAP tests, and so much more. From the primitive surgeries of the past to the politics of battling insurance companies who deny treatments here today, this book is never dry or dull. The book is like a medical drama of the past and present. There are interesting photos, advertisements and articles as well. The book was easy to read and understand, even if you are someone who does not have a background in science. Don't let the 590+ pages discourage you from reading this wonderful book, as at least 20% of that are sources used for researching this book. HIGHLY RECOMMENDED

ABOUT THE AUTHOR - Siddhartha Mukherjee is a cancer physician and researcher. He is an assistant professor of medicine at Columbia University and a staff cancer physician at Columbia University Medical Center. A Rhodes scholar, he graduated from Stanford University, University of Oxford, Harvard Medical School. He has published articles in Nature, The New England Journal of Medicine, The New York Times, and The New Republic. He lives in New York with his wife and daughters.