How To Read the Air; Dinaw Mengestu 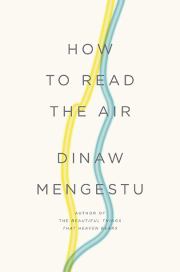 Title: How To Read the Air

, tells the story of the immigrant experience in America across two generations.
Jonas Woldemariam is the American born son of Ethiopian-immigrant parents, Yosef and Mariam. As an only child, Jonas bore witness to the tumultuous relationship of his parents on a somewhat regular basis, and according to him, he was acutely aware of a shift in the air prior to any outburst.

"As soon as my father said the last two words of that sentence, he felt an abrupt and dramatic shift in the air that precedes any violent confrontation. Something vibrated, buzzed ."

As an adult, Jonas meets and later marries Angela, a woman he met while working at a refugee center in New York City. Angela is a young attorney and later Jonas finds work as an English teacher at an academy in the city. He talks about pursuing his Phd in literature, but never takes action. He is aloof,  passive, emotionally numb, avoids conflict, and has never seemed to fit in, even as a child. His wife Angela has had a less than perfect childhood as well, and brings baggage from her past into the marriage.
When Jonas' estranged  father dies, he decides to take a breather from his frayed marriage, leaving his wife, his job, and New York behind as he sets out on a cross country journey to trace the path his parents took some 30 years earlier as they began their life together in the US. By tracing his parents belated honeymoon trip from Peoria, Illinois to Nashville, Tennessee, he begins to understand his roots, the emotional wounds of war, and the isolation and insecurities his parents faced after escaping Ethiopia.


As Jonas, tells the story of his life as well as his family's history, the reader is never really sure as to what is real, and what has been fabricated or embellished from his memory as a child.  The reader sees early on that lying, or embellishing the truth seems to come easily to Jonas, his mother, and even to his wife, Angela.  His mother for example, says that she came from royalty in Ethiopia; Angela made up stories about her own childhood, and Jonas embellishes the paperwork of refugees at the agency he had worked, to make their stories sound more interesting. He also lies to his class when telling him a story about his father.
As Jonas searches his parent's past, the reader is taken on a journey into war-torn Ethiopia, where his parents grew up, as well as a glimpse at their hopes for a better life here in America -- all through he eyes of a son who tells it, as he imagines it.  Jonas' stories are compelling as he tells of Yosef and Mariam's volatile relationship. He recalls the numerous times his mother packed and unpacked their suitcases, waking him in the middle of the night to say that they were going on a road trip, but rarely getting any further than a local motel or shelter.

"Life for my mother was lived in the spaces between departures".

As a child, Jonas learns how to avoid conflict and stay out of the way.


"I realized that all I had to do to avoid him was to blend into the background. That knowledge followed me from there, so eventually I thought of my obscurity as being essential to my survival. Whoever can't see you can't hurt you. That was the reigning philosophy of my days."

There was so much I liked about this book. I started out listening to the audio book; the narrator, Corey Allen was excellent, however, some of the passages really seemed to resonate with me, so that I found myself frequently referring to the hard cover edition as well.  The writing is beautiful and detailed and the story intimate. The way the story unfolds is extremely satisfying. I love introspective stories, and this one gets high marks in that area. HIGHLY RECOMMENDED.

I enjoyed this video by and about the author and his book. I hope you like it as well.
Posted by (Diane) Bibliophile By the Sea at 9:56 PM