The Chimps of Fauna Sanctuary: A True Story of Resilience and Recovery; Andrew Westoll 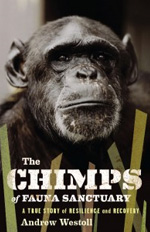 Title:  The Chimps of Fauna Sanctuary: A True Story of Resilience and Recovery

, serves as permanent retirement home for chimps which were used in biomedical research and experimentation.  The sanctuary,founded in 1997,  is located on a 240 acre farm outside of Montreal. It's founder Gloria Grow originally used a portion of the property as a dog rescue refuge for puppy mill dogs.

The author Andrew Westoll, hoping to gain more knowledge about how the chimps transitioned from the research labs, and often cruel experimentation, to life at the sanctuary, volunteered to help out there.  A few of the heartbreaking things he discovered were: baby chimps were removed from their mothers right after birth; chimps were injected with deadly viruses; chimps were subjected to unnecessary surgeries and forced to live without socialization. Would the chimps ever be able to trust humans once again, after all they had been through?

The stories about the chimps told of their lives before and after medical experimentation. They were sometimes difficult to read, yet they were told in a sensitive manner.  It was amazing to me that despite what some of these chimps had been though, some were able to recognize and respond to the kindness of their human caregivers, and were able to show compassion toward other chimps as well.

The US is the only remaining country to allow biomedical research on chimpanzees, and attempts have been made to pass The Great Ape Protection Act, to end this cruelty.

I was happy to have read this eye opening book, and I now have much respect for both the sanctuary's founded and the author, for giving this issue more much needed attention.  Their auctions were clearly a labor of love and a commitment to a cause.

This book is a must read for individuals who are concerned about animal welfare and animal rights.  A portion of the proceeds from the sale of this book, will be given to Fauna Sanctuary.
Posted by (Diane) Bibliophile By the Sea at 12:03 AM