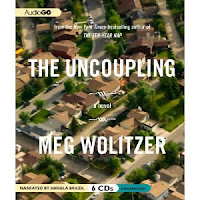 In search of light read, The Uncoupling

Dory and Robby Lang, English teachers from Eleanor Roosevelt High School in Stellar Plains, New Jersey. They seem like the couple who has everything going for them.  In their 40's, married fifteen years, and they are happy with their life, until one night when Robby's amorous advances send ice cold chills trough Dory's once responsive body.  When this happens again and again, she doesn't understand what is happening to make her feel this way.  She finds herself apologizing to Robby for the way she has been acting.

The book is an off shoot to the Greek play Lysistrata, where Greek woman had withheld sex in the hopes of ending the Peloponnesian War. I liked the way the author made this not just Dory and Robby's problem, but one that affected other staff members as well. To me this added interest to the sometimes funny, but other times flat writing. And, while I liked the message the novel drove home, about the importance of nurturing relationships, the ending, without giving spoilers, just didn't work for me, and in the end this novel fell short.

Did you read this one? What did you think?
Posted by (Diane) Bibliophile By the Sea at 11:45 PM