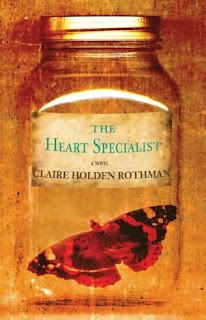 was an interesting read that caught my eye , and hooked me early on. I recently featured this book for one of my First Chapter, First Paragraph Tuesday Intros. In case you missed it, here was the how this book started out:


January 1882, St. Andrews East, Quebec.
" All morning I had been waiting for death, even though when I finally came the change was so incremental I nearly missed it. I had laid the squirrel out on a crate and covered it with a rag to keep it from freezing. Blood no longer flowed from the wound on its head, although it still looked red and angry. A dog or some other animal must have clamped its jaws around the skull, but somehow it had managed to escape, dragging itself through the snow to Grandmother's property, where I had discovered it that morning near the barn door. It had been breathing then, the body still trembling and warm. "
Although this book is a work of fiction, it is based on the life of Maude Abbott, one of Canada's first female physicians.  As the story begins, Agnes is only five years old when her father Honore Bourret, a famous doctor with a specialty in morbid anatomy (study of diseases) mysteriously disappears.  He was the center of a scandal in which his sister died. With their mother dead and their father gone, Agnes and her sister Laure are left to be raised by their grandmother, an aloof and woman, who did nothing to nurture the girls. Their last name is also changed from Bourret to White.
Even though Agnes was very young, she often watched with fascination as her father performed dissections in a special room in their home. Her biggest supporter of her interest in science and medicine is Miss Skerry, the governess, who told the grandmother that she has been watching Agnes, and she has "considerable gifts ."  At the age of fifteen, Agnes is sent to Smith's School in Montreal to study, and hopes to continue on to McGill to study medicine.
The year, however, is 1898 and McGill's doors are closed to women. Even when supporters of hers help to raise large sums of money, for separate facilities to educate women at McGill, she is denied entrance. She ends up pursuing her medical degree at Bishop University, a competitor of McGill. After graduating Agnes is offered a job with pay at McGill's Medical Museum. Still faced with discrimination, her colleagues seem annoyed by her presence, because she is getting paid, but not teaching or doing research.
Even though Agnes made huge advances for a woman at that time, her life seemed unhappy because of her father's disappearance early in her life. One day that mystery begins to unravel when she discovers a misshapen heart, and other specimens have ties to her father's research.
There was a lot to like about this book. Although it was heartbreaking at times to see the struggles Agnes had to endure early on with both parents gone from her life. Those struggles didn't end with childhood. Because of the time period and society's view of women and their perceived roles, Agnes had to work twice as hard as most men to be taken seriously.  The writing held my interest pretty well, but at times the writing seemed dry and, for at least (50) pages I struggled a bit. Despite this, I am very happy I read this book, and think that many other readers will find it a inspiring read as well.
Posted by (Diane) Bibliophile By the Sea at 9:49 PM