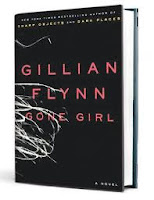 As a fan of this author's first two novels,  Sharp Objects and Dark Places, I was anxious to see for myself what all the hype surrounding her latest novel was all about.Gone Girl, released in June, 2012, and at times I felt like I was the only one who hadn't read this one.  You know how sometimes when there is so much hype, you can get that disappointed feeling when your done?  Yup, that is what happened to me... I felt let down.

In this novel, 30-something Nick and Amy Dunne were once a fairly happy young couple living in Brooklyn, NY. Well, on second thought maybe they weren't so happy after all, but I digress. In the 90's both were writers until a downturn in the economy left them both unemployed.

When Nick learns that his twin sister Margo has also lost her job and has moved back to their hometown in Missouri to care for their dying parents.  Nick tells his sister that he and Amy will be moving to Missouri as well, doing this without even checking with Amy.  Nick and Margo, borrow the last of Amy's trust fund money to buy a bar in town. Then on the eve of their 5th wedding anniversary Amy goes missing.  She she just leave? Was she kidnapped, or did  Nick have something to do with her disappearance?

Told through alternating points of view past and present by Nick (of Amy) and through diary entries by Amy (about Nick) prior to her disappearance, it quickly becomes impossible to determine the truth from the lies. Who's the psychopath?  Both Amy and Nick were equally disturbed, in my opinion, and one thing was certain for me -- they deserved each other.  Honestly, I don't think I've read anything in a long time with (2) such detestable individuals.

Although the author did a good job creating an engaging psychological thriller, and the twists and turns were unexpected, the ending aggravated me. In the end I was disappointed at myself for caving to the hype.
Posted by (Diane) Bibliophile By the Sea at 9:28 PM