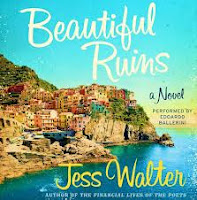 
A crumbling hotel, the Hotel Adequate View, set atop a small Italian coastal town, provides a backdrop for the Beautiful Ruins. Lonely, hotel owner Pasquale Tursi, sees an opportunity to make his hotel a success by attracting wealthy Americans. The year is 1962 and when the lovely American starlet. Dee Moray arrives, Pasquale becomes instantly infatuated with her.  She in Porto Vergogna for the filming of the movie Cleopatra, but is later removed from the set because she is pregnant.

The story then jumps ahead some 50 years when Pasquale, who has never forgotten this American beauty goes to Los Angeles in search of the woman he's longed for all these years.  It is here that I really started to lose interest in this novel, and started skimming an awful lot. Fifty years is an awful lot to cover in a short novel and found there was way too much crammed in, from war to a  reality television and a whole lot in between.

The story just did not work well for me. Although the writing was good; I especially enjoyed the descriptiveness of the Italian coast and of Hollywood as well, the story just felt disjointed and hard to follow at times. At first I wondered if listening to the audio, read by Edoardo Ballerini, was the reason, but I don't think this book would have worked for me even had I read the print version.

Did anyone else find this novel less enjoyable than you originally anticipated?
Posted by (Diane) Bibliophile By the Sea at 8:52 PM